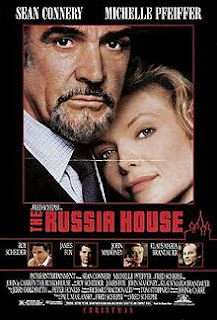 An ex-girlfriend of mine hated the Russia House. To her it was a needlessly complicated film. The opening of the film which shows us events before backing up and then starting over from before we came in and then following onward through what we’ve seen top the end annoyed her. Then again I never could figure out why she loved films and hated others since the love hate relationship was arbitrary.

Russia House is the story of Barley Blair (Sean Connery), a down on his luck book publisher who is contacted by a Soviet scientist who wants certain information to the west. Barley is recruited by British intelligence to do the job, but complications arrive in the form of a down on her luck mother (Michelle Pfeiffer) who is acting as the go between Barley and the scientist.

One of my favorite John LeCarre tales is given a sterling film adaption, which while not note perfect in recreating the book on screen (the end is more hopeful than the novel) is a reasonable reflection of it.

For me one of the keys to adapting a book as film is that at some point you have to be able to disengage fans of the book in favor of the current work of art. You can’t be so married to the original that it doesn’t work cinematically. At the same time you need to be able to do things the original couldn’t, such as live on screen. Russia House lives on screen thanks to the two stars. Connery and Pfeiffer are extraordinary and the sense of damaged lives possibly finding love that is created by them sends the film over the top. Yes the physical landscape of “Russia” helps a great deal, but at the same time we wouldn’t buy anything that happens if we didn’t like the main characters and give ourselves over to them. We, I, buy what happens because we buy the performances.

To me this is a great romantic thriller.  It's also a highly intelligent film that is light years beyond the similar stuff Hollywood throws at us. There is weight to the emotions and danger in everyone's action.  This is simply a great great film that has been sadly overlooked.

Search this one out
Posted by Steve Kopian at March 23, 2013