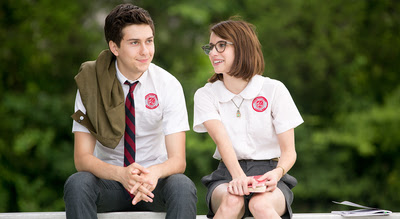 
Out of the 14 movies I saw at the recent Tribeca Film Festival, ASHBY was by far my favorite. It's the one movie I can say I truly loved and would even buy when it comes out on DVD. I'm really excited to report that Paramount Pictures will be releasing it, though I don't know when. The story is about a 17 year old boy played by Nat Wolf, and the relationship he forms with his neighbor, former CIA assassin, played by Mickey Rouke. This might have actually been the first time I had seen Mickey Rourke in anything, and he was great. The whole cast was great. Emma Roberts, who is so adorable in this, plays his friend from school and the movie also deals with their relationship. It also deals with his relationship with his mother, played by Sarah Silverman. I was never a huge fan of hers, but I liked her in this role. Reading the brief summary of it in the Tribeca movie guide, it seemed like it was going to be a coming of age movie. It definitely was, but it was a lot darker than I thought it was going to be. There definitely was comedy in it. I guess if I had to I would classify it as a dark comedy. See this movie when it comes out. I can't say enough good things about it.
Posted by Steve Kopian at September 23, 2015