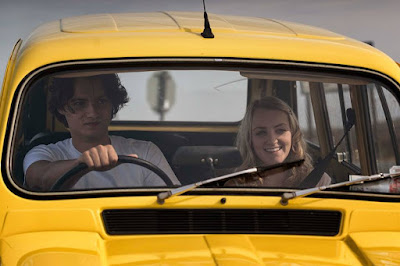 16 year old Emily lives in a foster home. A couple of years earlier after her mother died her father was institutionalized. When the regular letters from him stop, Emily decides that something is wrong. Traveling with her friend Arden she heads off across country to break him out.

Beginning with some haunting opening narration MY NAME IS EMILY grabs you heart and soul and drags you across the Irish country side with it's wise beyond her years heroine. This is a glorious examination of what it means to really be alive and how we see the world.  This is a truly heart warming film that gets you both in the heart and in the head- the film is full of philosophical discussions and deep emotions.

Interestingly while the film is without a doubt a cinematic treat of the highest order, it is also extremely theatrical and literary. Whole sections of the film are not told in conventional dialog sequences , but rather in long monologues. Sometimes its Emily's narration, some times its long stories that characters tell each other. The images in these sequences are at times fanciful and theatrical, but far from working against the narrative, they instead bring us deeper into the characters and their lives. Its not so much magical realism as personal realism.

I can not say enough good about this film.

While I would prefer not to call attention to the fact that writer director Simon Fitzmaurice is paralyzed by ALS, I find it un avoidable since I have to note that the two most living breathing cinematic celebrations of life that I've seen this year come from directors suffering from the disease. Like Patrick O'Brien's TRANSFATTY LIVES, which World Premiered at Tribeca in April, MY NAME IS EMILY is a big fuck you to death. Fitzmaurice, like O'Brien is clearly not going into that good night and instead giving us a glorious position piece about why we shouldn't go without kicking and screaming either. I truly hope that Fitzmaurice gets to make many more films because he has one hell of knack for creation.

I love this movie a great deal.This is great,intelligent story, told with great performances by wonderful filmmakers.

I apologize for not breaking the film apart, and not telling you everything, but you need to go into this film blind. You need to see this for yourself without my spoon feeding you all the plot details and themes. I'm not in the mood to do that simply because MY NAME IS EMILY is such a rarity that you need to see its specialness for yourself.

The film screens at Toronto tomorrow and two more times after that an should be on your must see list. For tickets and more information go here.
Posted by Steve Kopian at September 14, 2015