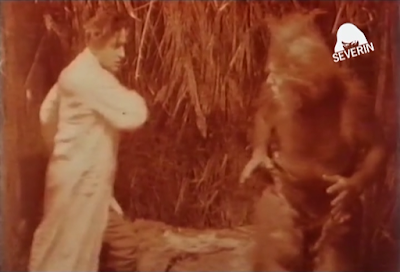 As the installation of Windows dragged on and I had to just sit wait for it to do it’s magic I put on ISLAND OF THE LOST a recently rediscovered German version of the Island of Dr Moreau. The film is included as an extra on the Lost Soul: The Doomed Journey of Richard Stanley's Island of Dr. Moreau Blu-ray.

The plot has a man reading in a paper that a bottle has washed up on shore with a message that seems to be from his long lost wife. She had disappeared years before while in London and was never heard from again. He’s unhappy since he’s about to be remarried but feels he must do something. Heading off in his submarine with a friend, a quack doctor who advertises he has made synthetic people, he goes to see what has become of his ex. Once there he runs into a Dr McClelland who is up to no good.

A seemingly unending 66 minutes long the film is largely an outdated comedy. That’s a polite way of saying it’s not funny. Even allowing for the racist jokes, the humor here is just not funny. Why would a doctor have fake patients? It makes no sense. Then once the characters get to the so called desert island the film just fails to function as the actors wander around the wilderness, a Chinese doctor bemoans wanting opium and the beat men show up in the final 20 minutes. None of it makes any sense.

Its so disposable I started to watch the Windows Set up screen and was more excited when the percentage of completion went up.

If you ever wanted to know a film that I would never have mentioned on Unseen this is it. Had I not been doing this a s journal-esque entries this would never have been a blip.
Posted by Steve Kopian at September 06, 2015