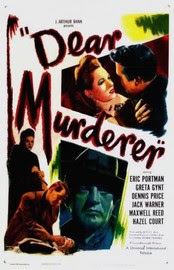 Today I saw two films which were chosen purely to help pass the time while I set up the new laptop and upgraded it to Windows 10. The idea was to pick something that I could watch or listen to as background.

DEAR MURDERER
A wicked little thriller that shocked the crap out of me with it’s truly dark shift in tone.

The simplest of plot synopsis would be that a husband discovers his wife is having an affair and murders her lover- but it’s not that simple, she has more than one. Complications arise and despite the frequent witty retorts between the various characters things turn rather dark

Playing more like a modern stab a murder mysteries and neo-noir the film this film moves in nicely unexpected ways. There is no doubt who the killer is the film’s opening 20 minutes or so is the husband conversing with and killing his victim. It’s a darkly colored scene that hooks you because you’ll really want to see where it’s going to go and whether the killer will get caught. From there the film follows the trail as the body is found and the police begin the investigation. It’s the ripples that the investigation set in motion that are the intriguing part. Of particular interest is how the wife navigates the events. Where she goes and how is not what you’d suspect.

This is truly a hidden gem. It’s one of those great little mystery/crime films that makes you sit up and realize that you really haven’t seen it all before.

(The second film will be up tomorrow)
Posted by Steve Kopian at September 05, 2015