Opening Friday:Sleeping With Other People (2015) 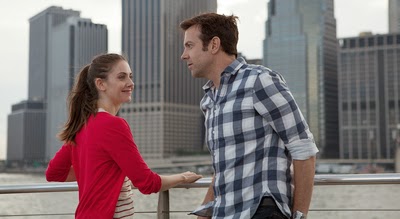 Opening Friday in theaters is one of my favorite films from Tribeca SLEEPING WITH OTHER PEOPLE. I thought this was great.Here's a repost of my review from back in April

Probably the most commercial film at this years Tribeca Film festival has two best friends trying not to fall in love. Its a hopeless task but they are going to give it a shot.

Jason Sudeikis and Alison Brie are utterly charming as the miss matched couple. They are note perfect all the way through to the point I can't imagine the film working without them. They both have a force of personality that carries it all along.

The real star of the film is the script. its clever, wonderfully plotted and full of endlessly quotable dialog. Where MOJAVE, another film at this years Tribeca Film Festival had wonderful lines of dialog, it had nothing else. Actually MOJAVE had such finely crafted lines of dialog that you could never imagine anyone actually saying the words. Here what comes out of Sudekis and Brie's mouths is exactly right. These are witty lines that these people would actually say.

I love this film a great deal. I really don't know why entirely, though I suspect it may have been a certain recognition of several conversations between the leads that echoed ones I had with my own best friend. I lived parts of this film which made me love it more.

This is a great romance and one of the few films from Tribeca I'm certain will have a long life among film goers.
Posted by Steve Kopian at September 07, 2015