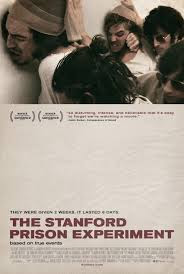 August 3
With a change in line up the NY Mets have started to play well and my dad and I are getting lost in the games. We’ve been long suffering fans so we’re enjoying this current run of good fortune. The upshot is that any films I watch for fun are being scheduled either before bed or when the game isn’t on.

I did catch a couple of shorts on line LOVE BITES a cute 3 minute film about a praying mantis in love and a re-watch of LOGORAMA an Oscar winner where various logos come to life.

The one feature was STANFORD PRISON EXPERIMENT which was for free on the IFC in Theaters service. I had a couple of long discussions about the film with Lesley Coffin who had done some interviews relating to the film, so I was curious about the film.

The film is a portrait of the title prison experiment which had Stanford University researchers randomly dividing up a group of men into prisoners and guards. They were to behave as if they were in a real prison situation. Things got so out of control that the experiment had to be cut short .

I’m mixed on the film. It’s an interesting portrait of the experiment however the film never really feels real. It feels more like the re-enactments that you get in the increasingly lazy documentaries on Discovery Channel shows. It never feels like it’s real or even a movie. It feels like dress up day at the young actors home. The unreality takes the edge off it all…it’s not a bad film, it’s just not great.
Posted by Steve Kopian at September 04, 2015