Film Diary 2015: The forgettable ROPE AROUND THE NECK and the lost gem WHITE PLAGUE


August 11
Another day sick in bed had me watching You Tube videos all afternoon. Top Ten movie lists and creepy and unexplained videos filled the daylight hours. I feel bad but in some ways I’m glad it wasn’t cat videos.

Before bed I watched two films from Sinister Cinema 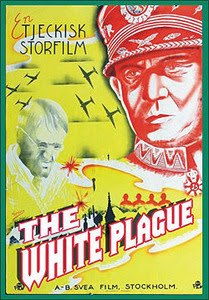 ROPE AROUND THE NECK is an abbreviated version of a euro crime thriller that wasn’t very good. I say its abbreviated because the Sinister print ran 75 minutes while IMDB listed a running time of 105 minutes. Frankly I would have jumped out a window if this was any longer than it was. Actually the brief running time was the only reason I made it to the end of the film. (Alec- if I wasn’t doing a film diary this film never would have been mentioned)

The plot of the film has a man plot to kill his wife but then finds out his mistress has been killed- or something. I say something because the whole thing is needlessly messy as friends and lovers of the various people are brought in. It’s lots of talk for very little pay off. I was bored silly almost from the start.

Take a pass on this one and if you have the film use the DVD as a coaster.

THE WHITE PLAGUE (aka Skeleton on Horseback) is based on a Karl Capeck play. It was written for the screen and directed by Hugo Haas who left his native Czechoslovakia for Hollywood when the Nazi’s came. Considering he was making films such as this it was a wise choice since the sentiments of this film would have gotten him shot,

The film I set in a country that is a dead ringer for Nazi Germany. The dictator is mobilizing for war and nothing is to stop them. However the country, and indeed much of the world is being ravaged by a disease called the white plague since it starts as white blotches which rapidly give way to the body decaying while the person is still alive. A doctor working in one of the poorer neighborhoods of the capital talks his way into getting a job in the most prestigious clinic in the country. He is certain that he can cure the plague- and he does- but he is restricted by the government as to who he can cure. He takes it further by insisting that he will cure no one until the country ends its march toward war. It then becomes a political standoff as the forces of war and the forces of peace wait to see if mankind will fall into the abyss.

A gripping polemic with a decided and bitter look at mankind, war and the control of medicine this is a film that surprised the hell out of me. I couldn’t believe that a country on the verge of being devoured by Nazi Germany would have produced a film such as this, but then again I’m looking back with 20/20 hindsight. Obviously the films warning that any country marching toward war and conquest will sow its own demise is none too subtle, but at the same time as the barely hopeful conclusion makes clear we will probably never do the right thing until it’s much too late. The end of the film is a bleak little pill and normally I’d argue about it just being there to prove a point- but at the same time it fits the film like a glove.

This is a really good film. It’s the sort of film that one could very well use as the basis of a masters or doctoral thesis. A must see for any number of reasons-it’s a heady science fiction film, its great political polemic, it’s a historical artifact that gives a clue as to what a soon to be conquered nation was thinking.

Thank you to Sinister for throwing this out to a wider audience
Posted by Steve Kopian at September 13, 2015