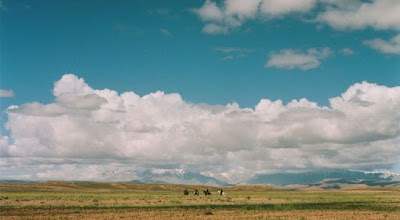 The Projections programming at the New York Film Festival can be hit or miss.  Formally focusing on avant garde films section now casts it's net wider.  The films are rarely for all tastes but they are an indication of what is happening on the fringes of cinema. The collections are very up and down depending on what is programmed and some can be a chore to get throuh while other's open your eyes to some really cool stuff.

Ben River's THE SKY TREMBLES AND THE EARTH IS AFRAID AND THE TWO EYES ARE NOT BROTHERS  is going to try the patience of a good number of people who wander into it. Nominally an adaption of a Paul Bowles novel the film is also several other things at the same time including a documentary on the making of the film. Its a strange cinematic hybrid that is very much the work of an artist (Actually the film originally screened in a London museum as part of an installation).

That doesn't mean its good or for most audiences.

A great looking film, the film remains largely obtuse and the sort of thing that long shots of nothing much in particular are tied to a sound track where no one says much of import. Twenty minutes in my eyes had glazed over and I was trying to fall asleep.

I really was bored by the film but I remained in the theater hoping that the film would some how pull it all together. It never did.

When the film ended I went digging for my press notes and it was then that I discovered that the director of the film also made one of my least favorite films A SPELL TO WARD OFF DARKNESS, which has nothing happen for 90 minutes as a man wanders around the countryside.  Realizing the press notes  for THE SKY TREMBLED... were probably like those of SPELL... I promptly deleted them because all of the clues about the film that should have been on screen were probably going to be in the notes which only the critics see. I want to see films as regular Joes do.

If you're a fan of the director by all means go see this. All others are advised to skip it.

This screens twice on October 4 for details and tickets go here
Posted by Steve Kopian at September 30, 2015