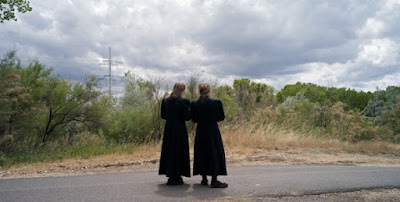 Amy Berg's look at Warren Jeffs who seized control of the Fundamentalist Church of Latter Day Saints(FLDS) , an off shoot of the Mormon Church has compelling story that is very messily told.

Jeffs is the soft spoken head  of the FLDS which professes a strict adherence to the original Mormon scripture, meaning the polygamy is still the way to go. The church was formed when the main Mormon church renounced polygamy. The members of the church are close knit and don't take to outsiders, more so after the trouble that they have experienced recently owing to head of the church Warren Jeff's tendency to marry girls as young as 12

Its a shocking story that has upset many people and landed Jeffs in prison after a stint on the FBI's Most Wanted List (he was next to Osama Bin Laden).

The short version of the story has Warren Jeffs being his mother's favorite son and protecting him at all cost. She would blame other people for his misdeeds and since Warren's father was the head of the church she had the power to do it. When the elder Jeffs began to get infirmed Warren positioned himself to seize control of the Church and his father's young wives. However when one wife got pregnant the old man had to go (he was incapable of fathering children at that point) so it's believed Warren killed his father. He then seized the reigns of the church and began molesting all the kids, even the ones he didn't marry. The underage wives got him in trouble, more so when a tape of his first night with his 12 year old bride surfaced. Jeffs ran abut was eventually captured and tossed in jil where he's still running the church.

I'm very mixed on the film. To be certain the story is compelling and very upsetting (a tape is heard of Jeffs having sex with his 12 year old wife) but Amy Berg fails to organize it so that it makes sense. Time frames are not clear. The order of what happened isn't the way we hear things. Worse Berg doesn't always explain things so that we understand them. There are gaps in what we are told and more than once I wanted to stop the film and ask questions about what we are seeing.

I don't hate the film but it feels like it was edited by someone way too close to the story. This film should have been as ass kicker, especially at its 90 minute running time but the film just flits around telling us facts and making us want to know  more. (I went home after the film and bought the book upon which its based just to get more info).

Is it worth seeing? If you're not paying to do so. The film is going to run on Showtime and thats probably the best way to see it.

The film starts at the IFC in Manhattan tomorrow
Posted by Steve Kopian at September 17, 2015