Blow Out (1981) plays Tuesday at the New York Film Festival 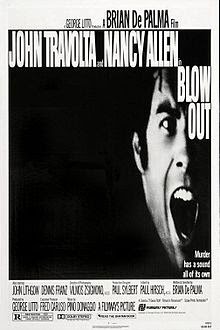 With the New York Film Festival screening BLOW OUT on Tuesday after a screening of a new Documentary on director Brian DePalma I'm reposting my review of the film which ran last December.

BLOW OUT was Brian DePalma’s follow up to DRESSED TO KILL It was a film that carried great expectations for those who loved the twisted Hitchcockian riffs of the earlier film. However this films mash up of Antonioni’s Blow Up, The Conversation and a political thriller left some people cold. I saw the film back in when it was released and was left feeling mixed on it.

BLOW OUT is the story of a movie sound man (John Travolta) who is working on the sound for a horror film when he accidentally records what turns out the to be the sound of a political assassination. Everyone thinks it’s an accident but Travolta here’s something and isn’t so sure. Of course he ends up being stalked by the assassin (John Lithgow) who wants to make sure that no one finds out what really happened.

As a thriller BLOW OUT is pretty good. It has some nice twists, some good scares and a heartbreaker of an ending. As something more than that I’m not sure that it adds up to much.

I say this by way of talking about DePalma’s worst trait, his riffing on old masters. Most of DePalma’s career has been a grand riff on someone else’s work. PHANTOM OF THE PARADISE is PHANTOM OF THE OPERA, many of his thrillers are riffs on Hitchcock, others are remakes or based on novels. Very few of DePalma’s films are original (and those that are strange comedies). Yes DePalma has turned out some great films but some are just sort of there or are so full of riffs that enjoyment is lessened because you can see where DePalma lifted material from.

Such is the case with BLOW OUT which starts as an audio version of BLOW UP where the possible image in a photo is replaced by a possible sound on a tape. While much of the film is a kind of riff on the Kennedy assassination the film is directly lifted from the supposed audio evidence of extra shots which were the crux of a Senate hearing into the Kennedy shooting a few years before the film was made (some people say a police radio recording made at the time of the assassination has extra shots). The film then takes on various Hitchcock motifs, mixes in the down beat political thrillers like the PARALAX VIEW and ties it all to a similar structure to DRESSED TO KILL (boy and girl are thrown together to solve a crime) and turns it out as if it’s something new.

We’ve been here before, any number of times. That doesn’t make it bad, it just makes it less than a masterpiece.

Actually it’s such a middle of the road film that I was pondering for a long time why, of all of DePalma’s films this film was picked as a Criterion release. It was only not long before I started this piece that I realized why this film is a Criterion release and why many cineastes love the film, it’s such a Frankenstein monster that you can talk about it endlessly. What I mean by this is made up of bits from so many other films you can talk about it endlessly. Pick a part of the film and you can do an hour. It’s a great discussion film.

The film plays at the New York Film Festival 9pm on September 30th following a showing of the documentary DEPALMA
Posted by Steve Kopian at September 26, 2015