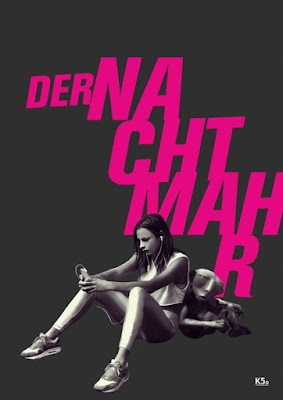 Wow. This is way cool.

After a weird night at a rave  Tina, a teenage girl finds she haunted by an ugly beast  that only she can see...

Easy to summarize but impossible to describe film is a one of kind head trip. Sitting in the dark with the soundtrack blaring and the flickering, at times strobbing image(the film starts with a warning it may trigger epileptic seizures and deafness) DER NACHTMAHR  is determined to put in into it's own head space and keep you there for 85 minutes. And it does just that-this film grabs you and thrusts you to some other place forcibly. Watching the film in the darkness I found myself drifting off into some weird land similar to our own and the head space of another person entirely.

I am uncertain how to really discuss the plot. The simple statement above tells you everything you need to know going in, since it says everything and nothing. As for more beyond that I'm at a loss. I'm still trying to work it all out myself. The trouble is that the film is intentionally unclear about what we are seeing. The notion of reality, our own and that of the various characters is always in question.

How much can I tell you without spoiling the film? At what point would I destroy the finely crafted sense of reality? And how do I discuss it when I haven't really sorted it out myself? Any real discussion would require I make a decision as to what the reality of the film is. I would have to work out what the beast is and if the film was real, a dream, or something else. I have lot of questions and not a lot of answers. I suppose I could ask the director but why would I want to do that when the film is this wonderful puzzle box one can argue over. (for the record I turned down an interview with the director partly because I need to see the film again a couple more times before I could discuss it with himwith any depth, but partly because talking with Akiz would probably reveal too much)

I will say that since the film is angled as a kind of teenage coming of age tale I'm curious how women will react to it. The film seems to very much tied to being a young woman- but it was made by a man so I'm forced to ponder how truthful it is.

While the film is being build as a horror film it's much more disturbing than scary. You will not come out of the film having experienced any cathartic screams. You will however come out of it with a grand sense of unease and the world not being right. This is a film that will linger in your psyche and color how you see the world for days afterward, something I know from experience).

This is one of a kind film that people are going to argue over for years. Those who need clear cut monsters or mad slashers  are going to hate it, while those of us who love films that challenge us in what we thing and expect from the world and from cinema are going to find a truly special film.

I have to say that DER NACHTMAHR a truly cinematic experience. You need to see this is a theater if possible. This is not a film that is going to work as well on a smaller screen TV or in the daylight. This is a film that really must be experienced in the dark and as big as possible. You need to fall into the changing visual landscape and be rocked by the alternating deafening sounds and silences (This is really an incredibly loud film at times so be prepared). The film is a technical marvel and when you see it in a darkened theater it  messes with your psyhe in a way that few films ever come close to doing.

This film is one of the real cinematic finds of 2015. It is a must see for anyone wanting a challenging film that is well made and off the beaten path.

And best of all this is supposed to be the first part of a trilogy- I can't wait.