NUFONIA MUST FALL at BAM is amazing 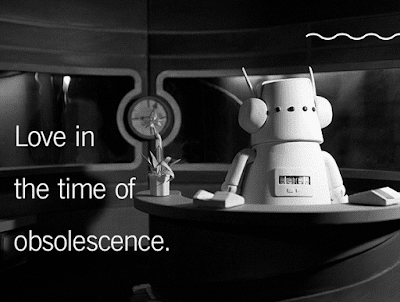 Based upon Kid Koala's graphic novel, which was shortened and altered for a much better effect, NUFONIA tells the story of a robot who meets a girl and falls in love. The show is done live on small sets with puppets. The performance is then projected over the heads of the musicians and actors.

Its a weird theater motion picture hybrid- and it's absolutely one of the most moving, wickedly cool, amazing,"I don't have words to express" evenings I've ever had at the theater. The only reason I wasn't reduced to tears during most of it was I was too busy having my eyes dart from the small sets in from of me and the big screen above. The over whelming feeling watching it was this is real....and a movie...but it's real because I'm watching the characters inter act right in front of me. Its like when you meet a Muppet for the first time and the performers disappear- and you know they are real people.

In the playbill Koala said that he was influenced by Charlie Chaplin and to be honest the show is very much a kin to CITY LIGHTS. There is something about the romance in that film that feels like its a blood relative to NUFONIA.

I have no idea what to say except you have to see this. I chided BAM on Twitter that four days isn't long enough- lots and lots of people NEED to see this. Hell this is a date show (And the date sequence is freaking fantastic)

I don't know what to say- words fail me.

If you can you must go see this. Seriously this is just one of the coolest things you can see live.

And that's not the best part- before the show everyone plays bingo with really cool prizes. On top of that at the end they let you go on stage and look at the sets and meet the puppets. I will post pictures when I download them.

Again- go see this- hell I'm going to see if I can go again because I serious feeling that my life will be lessened if I don't see this again.

For tickets go here
Posted by Steve Kopian at September 17, 2015