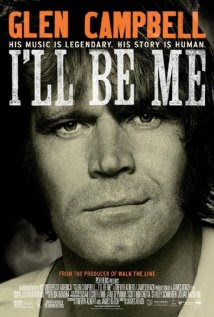 There is such a thing as seeing too much of a story. There are times when the endless news cycle coverage of an event or in this case a performers life takes the edge off the inevitable documentary that sums it all up. Such is the case with Glen Campbell I’ll Be Me.

I’ll Be Me is a chronicle of Campbell’s battle with Alzheimer’s Disease and his final album, song and concert tour. We watch as Campbell goes through the medical tests and he and his family get ready for and head out on a tour across the country. What was supposed to be a quick five week jaunt turned into a 151 concert tour that lasted the better part of two years. It’s a heart breaking journey as we watch as the disease slowly robs Campbell of his memory and his life- leaving- somehow, miraculously- his ability to play music. It is in the words of someone the deepest part of his soul so it was the last to go.

Campbell’s story is heartbreaking and watching him slide into oblivion is something that is very hard to watch. Your heart bleeds for his wife and kids. The yo-yoing of his focus coming and going as he goes on stage (when he seems more there) and off (where he seems lost) makes you want to scream can’t he be on stage all the time? The tour may have been the best time of his daughter’s life, but there is no doubt that watching her dad her dad drift in and out of lucidity was very bittersweet.

How you react to the film is going to depend on how much you know about Campbell and his tour. I’ve been a huge fan of Campbell since I was a kid and I watched the a story unfold in real time via news reports and TV appearances. I ‘m in the crowd in the film for the Town Hall Concert. Watching the film I knew much of the story already. And that’s the problem, there wasn’t anything new. I knew the stories. I had seen what had happened and I had heard variations on many of the informational conversations, so this film didn’t have the impact it should have. This isn’t to say it’s bad, its not, its just that the film is going to play better for those who don’t know the story. I suspect in five years this will get a bump up in love as its chronicle of a brain in decline can be seen on it’s own terms.

As it is now it’s a good, if slightly bland recounting of a well covered life.

Glen Campbell: I’ll Be Me hits DVD and Blu-ray today.
Posted by Steve Kopian at September 01, 2015