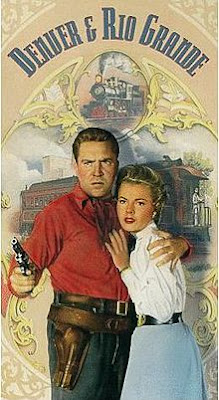 August 6
(For the two of you wondering there is no entry for August 5 because the only film I saw was FANTASTIC FOUR. It was at a press screening and when I got home I ended up writing until 2 am to get a review up in a timely fashion.)

Viewing on August Sixth was a bit haphazard. I ended the night with a screener of HARBINGER DOWN (Review here) which I absolutely loved and which came out on DVD a few days ago. Most of the evening was spent bouncing around the various cable stations watching pieces of movies and TV shows. Eventually my dad and I settled down on the 1952 western DENVER AND RIO GRANDE.

The film is the fictionalized story of the building of the railway and is based on the conflict the railway had with the Atchison Topeka and Santa Fe over several rights of way that turned bloody. It mixes actual people with fictional characters to create a rousing film.

The plot of the film has Edmund O’Brien surveying the path through the mountains for the title railway. Running afoul of the competing railway’s surveyors lead by Sterling Hayden One of O’Brien’s men is shot in the back by Hayden, but the situation was such that O’Brien thinks he may have done it.

When a court injunction arrives ordering work to cease O’Brien and his men continue to work. But Sterling Hayden has a spy in O’Brien’s camp and he uses the information to cause havoc via sabotage, robbery and murder.

This is an exciting film full of intrigue and action. There are several action set pieces that are just fantastic, chief among them is the extended race to get the head of the railway to Denver, shot on the actual locations the film looks amazing. And on top of everything the whole set piece has the actual crash of two period engines that had been designated for the scrap heap. It’s a moment that is really cool and has a weight that a modern CGI sequence can’t match.

While the film isn’t perfect-the love/hate relationship between O’Brien and the young woman who turns out to be the spy is much too contrived- the film is ultimately a grand adventure. It’s a film that is such a good time that when it finished I started to see if I could add it yo my collection
Posted by Steve Kopian at September 07, 2015