I just saw the first New York Film Festival screening of Yorgos Lanthimos’ feature, The Lobster, which will be shown again tomorrow at 9 pm. This makes the director 2 and 1 for me, with his latest work getting me all tingly with provoked thoughts and emotions, much in the way that his first feature Dogtooth did. Alps, which fell in between, made less of an impression but now I am determined to revisit it.

The film is set in a dystopian future based around a fantastical premise – single individuals must enter into binding relationships with another or face dire consequences, such as being transformed into animals – rendered in entirely un-fantastic fashion. There is no effect on the setting making it appear futuristic, and the only hint of how humans are changed into various creatures in the bestiary is a closed door, above which is hung a sign that says something like ‘animal changing room.’  Along with details such as this, much of the narrative is also left up to the imagination. Lanthimos has an intriguing way of progressing the story, narrated from a point of view of particular poignancy down the line, that reveals the workings of its world little by little. Right up to the end, the viewer finds herself constructing the reality onscreen based on a modest sprinkling of clues. It’s an act of reverence, not disregard, for the audience.

The Lobster has a dry sense of humor that sneaks up with such uncanny deadpan and in the midst of laying out such peculiar scenarios, one often is not certain whether they should laugh or not. Much of this humor stems from the abovementioned narrator drolly accounting for the absurdities that befall the protagonist (played by Collin Farrell) as he maneuvers the strange as he tries to maneuver the bizarre landscape of a hotel meant to engender the coupling of its unattached inhabitants. Meanwhile Farrell’s pained sincerity, showing a complete ineptitude at manipulation or disingenuousness toward potential mates, is both endearing and painfully funny.  The script is also filled with lines that paint pictures of awkward hilarity in viewers’ minds, such as a rebel leader’s explanation that they ‘even dance alone. That’s why (we) only dance to electronic music.’

Lanthimos along with cowriter Efthymus Filippou tell a story filled with incongruities. Great expenditures of energy can go into acts of inconsequential pettiness, while other times characters casually commit acts of unthinkable cruelty. Even the kitsch paradise of the first act’s hotel, populated by naturally funny figures like a lisping fellow guest (John C. Reilly) and robotically enthusiastic master of ceremonies (Olivia Colman, whose filmography includes The Office, Look Around You, and Hot Fuzz), can stun audiences with sudden moments of sadism. Those who have experienced Dogtooth will know to beware the seemingly innocuous appearance of a toaster oven.

The subtext is filled with distrust for organizations, both those that are established and created to fight the establishment. It also teases apart the ridiculously complex and agonizing ritual our modern society have made of finding mates, without pointing any fingers. The social landscape here is beset with extreme inanities, for instance compatibility is based on individuals' shared physical impairments. Yet then we are dared to say that we really have it any better off.

As for a few personal touchstones: I am reminded of The Double, Richard Aoyade’s equally dry dystopian future yarn filled with gallows humor galore, even if more for the dim fate of both films’ sad-sack protagonists than their visions of the future. Structurally there is something about The Lobster that keeps bringing to mind Sion Sono. Even if Lanthimos’ aesthetic is far more subdued, the way they allow their stories to meander off the tracks into epic or at least seemingly epic lengths shows Lanthimos is something of a kindred spirit to the Japanese provocateur, giving audiences a bit of an endurance test. All the better to bring about empathy for their protagonists’ pained positions.

There is no official release date for the film in the US but in the UK, The Lobster will claw its way onto screens October 16th. When it makes its way to this area, I would gladly see the film again if it plays one of the area’s cozier repertoire theaters, such as IFC or The Alamo. Not the least of which to see the film with one particular scene with French dialogue subtitled, which was unintentionally left without captions according to Lanthimos during the post screening Q & A.

Below are pictures of Lanthimos and actresses Rachel Weisz and Ariane Labed from the Q & A afer the screening. 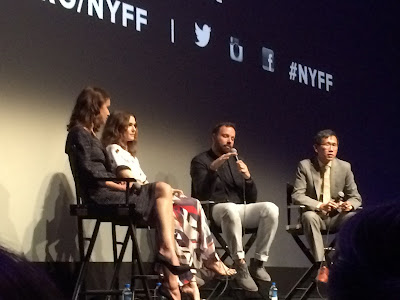 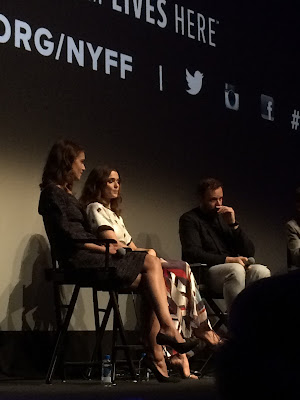 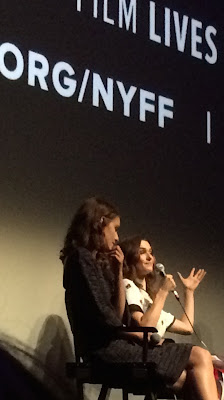 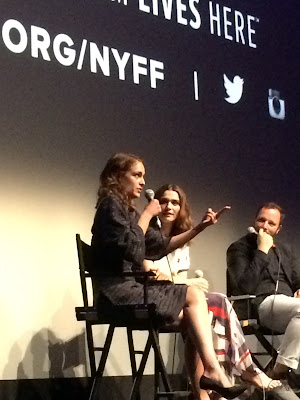