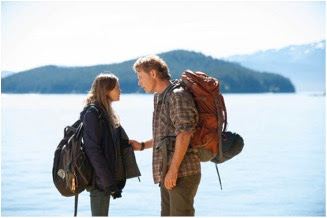 WILDLIKE has been bouncing around to film festivals for the last year or so and is now trekking into theaters across the country for a regular theatrical run.

The film has a teenaged girl sent to stay with her uncle in Alaska while her mother goes through rehab. All would be fine except the uncle is a creep and tries to molest the girl. When she fails to hear from her mom she bolts and tries to head home to Seattle, but she is ill prepared for the trek. She ends up colliding with an older hiker when she breaks into his motel room thinking it’s empty. Figuring that he will get her where she wants to go she shadows him and eventually falls in with him.

I completely understand why this film has been kicking around to so many different film festivals over the past year. This is a very good little film that takes a well-worn plot of a tenderfoot on a journey falling I with a master and makes it seem new. It does that by doing something so seemingly simple that you wonder why more people don’t do it, namely taking well drawn and nicely defined characters and turning them loose in real world situations. In all seriousness all director Frank Hall Green has done is take real people and drop them in a certain situation and let them go. He doesn’t amp it up, resort to clichés or try to wring false emotion from any of the situations , he simply lets it happen. The result is a film that is infinitely better than we should ever expect it to be.

I should mention that a large part of why the film works is due to the two leads Ella Purnell and Bruce Greenwood who don’t over act and just are. The result is they disappear into their roles magnificently and are to be applauded.

This is a solid film that’s worth your time and money when it hits theaters and VOD this Friday.
Posted by Steve Kopian at September 22, 2015