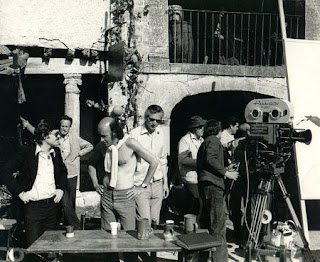 August 9
Despite my plans to attend 7 films, the  only films in Lincoln Center's Richard Lester retrospective I managed to attend was his 3 and 4 MUSKETEERS. (I was going to see THE RETURN OF THE MUSKETEERS which followed this two films but Lyle Lovett was playing across the plaza for free so I went to see him play instead.)

I have seen all three films multiple times and I've reviewed them here at Unseen (For those who want my originl reviews of the three films they can be found here: 3 MUSKETEERS , 4 MUSKETEERS, RETURN OF THE MUSKETEERS)

Until Sunday August 9th I had never seen the films on the big screen. Part of the problem has been they rarely screen the films and if they do they tended to be when I couldn't go. But on that Sunday the planet aligned and I got to see two films that were on constantly on  in my house thanks to lots of rebroadcasts on HBO in the 1970's and 80's.

For those who don't know the two films were filmed as one adaption of the classic novel. The producers realizing that there was no way a four hour film was going to fly cut the one film in two. The cast balked and ended up suing to get paid for a second film- they won, but got paid less then they should have.

Seeing the film big for the first time I was struck by a couple of things.

First I was amazed at how amazingly Lester filled the frame. The world of the Musketeers really bleeds off the screen. There are small details everywhere. Its more than the asides from the extras there are objects and actions that make the films bigger.

The first films end sequence with everyone walking off toward the camera creates isn't that good compared to the rest of the film- its a moment that's clearly scripted. It also raises a serious problem in that Faye Dunaway and Oliver Reed see each other- yes years pass but still they should have recognized each other.

The other thing I never really noticed until I sat down and really and truly watched them back to back was how choppy the start of the 4 MUSKETEERS is. Its extremely choppy as threads about the revenge come and go and are mixed with the Protestant siege. The film doesn't seem to really know what it's about (and amazingly it's held by many to be the better of the two films).It also throws up weird plot twists such as why doesn't Reed kill Dunaway when he knows she's no damn good. I always liked the 4 less than 3 and now I know why.

Seeing the film on 35mm and big was cool, but I'm becoming less and less certain we actually need to do this. Yes we should see films big and as intended but watching the first 75 minutes if 3 Musketeers was a bit hard. All of the colors seem to have shifted to red. I understand wanting to keep things organic but at the same time the people who prefer the color shifted and scratchy films also want perfect image at home via Blu-ray. It boggles my mind.

That said I had a great time visiting with some old friends in the way they should be seen.
Posted by Steve Kopian at September 09, 2015