Film Diary 2015: SERPENT'S TONGUE, GRAYHAVEN MANIAC, LURE OF THE CIRCUS, and LUCK OF THE ROARING CAMP 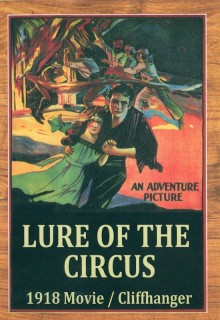 SERPENTS TONGUE (2012)
Low budget horror film released through Alpha Video (aka Oldies.com). A repressed young girl finds an ancient amulet that had been in her family for ages. When she putsit on she becomes a sex crazed woman out to kill. Actually she's possessed by a demon. Wildly uneven film swings from looking like a literal home movie to a fine low budget film often within a scene or from scene to scene. The result is that the film never manages to get a consistent tone so the film becomes difficult to watch. Worse are long static sequences where people just stand and talk or walk and talk. There doesn't seem to be a need for several sequence other than to make a certain running time.

GRAYHAVEN MANIAC (2015)
On the Alpha DVD with THE SERPENT'S TONGUE this is real close to being a home movie with the sort of performances you get where actors and actresses are clearly watching the camera or whom ever is behind it. The sound alternates between cinema sound and home movie distortion. My patience for this nonsense was low and after about 25 minutes (about half the film) I turned off the nonsense.

LURE OF THE CIRCUS (1918)
Surviving fragmented feature version of an 18 part serial is interesting if you go in knowing that the continuity is going to be messy at best  as well as knowing that you are going to see some truly spectacular things- the circus footage is of two real life circuses. Wacthing what remains of the film you get the sense that this must have been truly great at one time- but what remains really makes no sense with title cards attempting to fill in a story which is much bigger than the cards can handle. Its a curio for film buff at this point

LUCK OF THE ROARING CAMP (1937)
Oft told tale of a group of miners raising an orphan baby and what happens after the miners strike it rich. Its a creaky melodrama that frequently plays silly. To be honest my interest waned early on and what I was watching while I rewrote notes became something I ignored while searching the web.
Posted by Steve Kopian at September 16, 2015