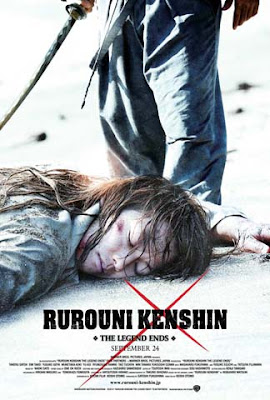 Picking up where the previous film ended- with Kenshin having been carried off a beach, the film races forward as Shishio makes his plans known to the world as he blackmails the government into putting a price on Kenshin's head. They are to find him and then publicly execute him or else he will bring down the government by revealing all their dirty secrets. The trick is they will have to find Kenshin who had been found by his old sword master and who still has trick or two to teach him.

If you haven't seen either of the previous films (or if you don't know the manga or anime) don't even bother with this film. As action packed and deeply moving it all is, the film requires that you know who all of the characters are before you start with the film. Since this is just the second half of a five hour movie it makes no effort to explain who anyone is. This film doesn't make any pretense that it was made for people who haven't seen what has gone before- it simply goes.

This film is both amazing and exhausting (and a tad infuriating). The action sequences are are even more incredible then the last film. The battles between Kenshin and his enemies are just kinetic delights of the highest order. Its an absolute blast watching all of the fights go down. The final fight between Shishio, Kenshin and some others is just jaw droppingly awesome in the truest sense of the word. You have never seen fights like this. They are so thrilling that by the time the film ends all of the plot twists and motion have worn you out. I was ready for a nap when it was all over.

As I said about the last film- together these films make up one of the finest action films you'll likely ever to see.

As for the infuriating part- there are simply too many characters and too much plot for both this film and the previous film to support them all. Too much is not always a good thing and as the THE LEGEND ENDS comes to it's end you realize that the filmmakers have thrown too much at us over the previous four plus hours that simply is not going to be dealt with or explained. Where are some of the villains we had seen previously? I don't know. And while the film only really succumbs to Mondocurry's test* for if a manga/anime live action film works on it's term at the very end, the two films remain one of the best viewing experiences of 2015.

You must track them down.

(*-Mondocurry's manga/anime test was devised when he reviewed ASSASSINATION CLASSROOM at Fantasia. He had argued that the reason manga/anime adaptions tend not to work when made into live action films is that they never transcend their origins. The films remain primarily of interest to fans of the source because:
1: They are made with the fan base in mind and don't explain enough for the non-fan to get it
2. The films remain episodic in structure and don't become one unified tale.
If a manga/anime film is to work you have to be able to walk off the street and be able to follow it. Additionally the film has to feel like its one story not a series of chapters with fade out every couple of minutes.)
Posted by Steve Kopian at September 11, 2015