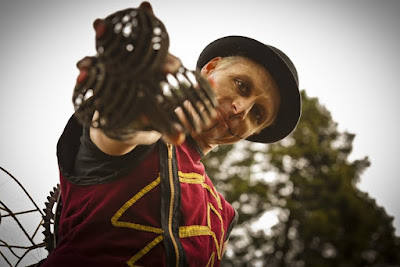 Building on their book VINTAGE TOMORROWS cultural historian James Carrott and futurist Brian David Johnson bring together a number of leading voices, writers, artists and creators in the Steampunk movement to ponder how the refashioning of the past may give a clue as to the future.

For those who don't know Steampunk is a movement or literary genre that imagines an alternate history where, nominally everything is powered by steam. However in reality the movement has its roots in a kind of idealized Victorian era where technology took alternate roads running  not only on steam but other fantastical modes of power. The things that people create are more often than not really cool.

A hyper busy nonstop 65 minutes, this film is both too much and not enough of a good thing. Filled with tons of talking heads and a seemingly endless array of art and created items, this is everything you ever wanted to know about Steampunk were afraid to ask...and that is the problem the film is literally trying to tell you everything about it and what it means and how it can shape the future in an hour. Its way too many people talking in small bites about things that need to really be explored. Its a lot of interesting things with no real discussion.

To be honest about 15 minutes in I kind of tuned out. Too much was being thrown at me and I stopped being able to catch anything, largely because I wasn't done processing what previously come my way. Imagine talking to someone who knows everything about a subject you're interested in. Imagine that they are going to then tell you everything they know but at no point are you going to be able to slow them down, ask questions or think about what they are telling you. You are going to be taught a subject in one go its sink or swim.

My one over riding thought while watching this was thank god I'm not being tested.

I an age where documentary filmmakers are forever making films that are much too long here we have one that is much too short. This film could use an hour. I would love more on the origins of the genre, more discussions beyond sound bytes, more on how the past the that is idealized was ultimately racist and really ugly. I'm also not sure how Steampunk is really political or how it shows a path to the future since its set in a different now than we live in.

I don't hate this film so much as I'm disappointed in it. Who was this made for? Those into Steampunk on the level that this film implies is going to know much of this already. Those on the outside looking in are going to be overwhelmed and left wondering who are these crazy people.