Sunday at the movies: RESET plus THE VILLAGE OF NO RETURN, JAPANESE GIRLS NEVER DIE and MON MON MON MONSTERS at NYAFF

After a week where I did not watch any movies, I doubled down and then some with one at the AMC 25 in Times Square and three at during y first visit to this year's New York Asian Film Festival.

I began the day with a trip to the AMC 25 to see the Jackie Chan produced RESET. I wanted to see something just for the hell of it, where I didn't have to review it and JB's review of the film made me want to give the film a shot (JB's review of can be found here)

The film has Yang Mi as a researcher on a time travel experiment which may be close to a real break through. A rival company kidnaps her son and demands she give them all the research (their program went horribly wrong). The kidnap plot goes sideways and soon multiple Mi's are fighting to save their son. Honestly it is complete and utter nonsense from frame one so don't even try to make sense of it- just go with it until the action starts when it blows the doors off everything and just flies. You'll still be screaming at the screen at the whys and hows but the cast will have sold you on the characters so you'll buy the kinetic sequences.

Seriously don't think about it- just get popcorn and see it.

After meeting Nate Hood for lunch we headed up to Lincoln Center for three films.

Strangely things were really low key- and while a good number of the NYAFF family was "there" in the audience the people running the fest were oddly quiet keeping to themselves. 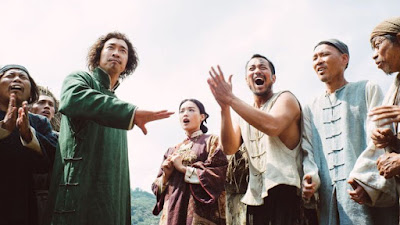 The first film was THE VILLAGE OF NO RETURN.  This a comedy that would make an interesting counterpoint to Sabu's very dark HAPPINESS which is playing at the end of the festival (A review closer to time).

The short version of the plot has a "monk" coming into the village with a helmet that will make them forget the thing that bothers them. The town doesn't trust him but through a chain of events he ends up using it on everyone and taking over the town for his own purposes.

The film is at least a half an hour too long, with way too many subplots that go nowhere.. For example the town is waiting for the arrival of a train - for no reason, and Eric Tsang has very funny series of cameos which have almost nothing to do with anything that happens(well it does, but it could all be removed).

On the other hand if you forgive the excesses the film is can be a great deal of fun. Its funny and thoughtful (what do we lose if we choose to forget our pain?) and it has what maybe the best martial arts sequence in all of NYAFF.  The more I think about the film the more I like it and would gladly recommend it. 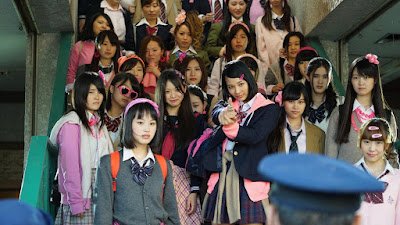 JAPANESE GIRLS NEVER DIE is a pro-woman tale that is constantly looping back on itself to the point that very little of it makes sense. Worse the looping creates some weird plot anomalies that shouldn't be there.

The film nominally is about woman who is being put upon by her bosses and is having an affair with her next door neighbor. She is the subject of the work of trio of graffiti artists who are using a missing poster of her as the subject of their art. Meanwhile a gang of school girls are going out and beating the shit of guys who are stupid enough to be out on their own.

Told in a manner that not only jumbles the time frame but also repeats sequences several time the film doesn't quite hang together. While sequence have stunning power (some of the scenes about love are wonderful) the film as a whole is head scratcher.  We are rarely with the film and instead are following where it leads a couple of beats behind going "oh so that's what..." several minute after we should have. Worse, because the time frame is jumbled, events don't line up correctly for example the graffiti shows up in sequences which are revealed to take place before they had produced the art.

Some people liked it, most seemed to be scratching their heads. I was left pondering what the programmers saw in the film to make it the first film they got for the festival. Other than the provocative title I found very little here. 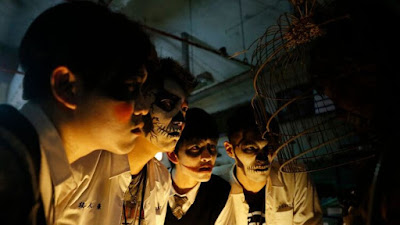 in 2012 Gidden's Ko was one of the most moving and well loved films to every play at NYAFF- YOU ARE THE APPLE OF MY EYE. A good many people I know still talk about it as a high point of all the festivals going back to the beginning. Ko's last film was so well loved that his MON MON MONSTER brought out a large crowd on his name alone.

Before the film played a woman in the audience stood up to warned everyone that the film was incredibly bloody- I'm not sure how she knew but she was right (during one scene in particular the audience gasped at the sheer volume of blood). Sam Jamier in his introduction warned everyone that this film was 180 degrees from APPLE OF MY EYE and that it was an incredibly cruel film. He said it was a brutal look at bullying.  It was a statement which resulted in everyone bracing themselves for the worst. And once the film started we got exactly what we had been warned about.

The plot of the film has the most bullied person in school (except one) being accused of theft. When he gets the goods on the bad guys, he abused further by a teacher who tells him to suck it up and make friends with his abusers because connections are what is needed in life. The quartet are sent out on an assignment to feed some elderly people living in a run down building. As a result they stumble upon a once human monster living in the building. Managing to carry it back to a disused part of the school, they tie it up and set about abusing the shit out of it simply because they can.  Meanwhile the sister of the monster begins to hunt for her sibling, slaughtering anyone from the school she meets.

Less a narrative then statement paper, we are forced to deal with huge truck sized plot holes as Ko frequently has things happen to prove his point 10 times over. Everyone, even our hero is vile with only one person, the lowest of the low, who is good. Ko has stacked the the deck and made everyone pure shit- with the result that late in the game changes in character make zero sense. This is yet another trip down the paths of " we are all monsters" and "maybe the so called monsters aren't so bad". We've been here before with the result MON MON is nothing we haven't seen before except that it amps the cruelty level up to 500 on a scale of 10. It is so intent on making it's point and getting a reaction that it goes way overboard on the nastiness at the expense of everything else. The film most certainly provokes a reaction but I'm not sure that's a good thing since the violence is so brutal (such as the amount of the blood in a bleed out at basketball game) that it all becomes ridiculous, effectively cutting its own legs out from under itself.

Worse the film is at times intentionally very funny. There are some jokes and somethings can be seen as funny if you don't see them as having a real world context (and have the blackest of senses of humor). The result of all the humor is that some shocking scenes brought roars of laughter from the audience. Several scenes that should have been sad or touching brought giggles. Nate Hood was horrified because what people were laughing at what wasn't really funny but grand tragedy (and it wasn't gallows chuckles but deep belly laughs). I know why the humor is there (the audience would kill itself if it wasn't) but it undercuts the emotion and prevents the film from indicting those of us in the cheap seats.

Over all I don't know what to think about the film since Ko's themes are far from new- even if the level of violence is. I can't really take it as a horror film because it isn't scary despite some great set pieces (the sister's mass slaughter sequences are amazing). And as a drama the plot holes, stacked deck in the plotting to make a point and odd shifts of character reduce the film to little more than a polemic or cinematic poke in the eye with a sharp stick. Its a film of great pieces but as a whole it just isn't very good.

To be certain the film is going to have a long life as it's mayhem (the bus and basketball sequences in particular) become part of horror's iconic moments- but I seriously doubt that beyond that that anyone is going to be talking about this film two years down the road.
Posted by Steve Kopian at July 03, 2017