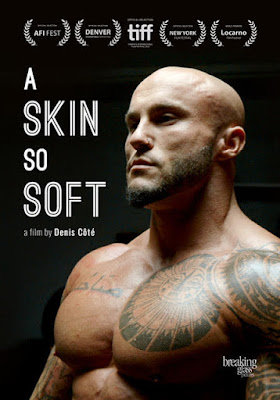 This portrait of bodybuilders Jean-François, Ronald, Alexis, Cédric, Benoit and Maxim is either going to delight you or put you to sleep. That shouldn’t be taken as any indication of quality, simply a statement that it’s observational style is not for all tastes.

Beginning with a the morning routine of the men the film follows as they get up, eat breakfast and begin their work out. We watch as the various routines are intercut and the men work out solo. I think we are almost 40 minutes in before anyone speaks to each other. The rest of the film is the men going through their days.

If you think this is going to be like the Pumping Iron films you are going to be disappointed. It’s observational reporting ala Frederick Wiseman or the Maysles and very low key. This isn’t yelling and mind games. This is the real life as lived.

For me it was nice but not my cup of tea. While I like observational documentaries I prefer them to be something I’ve not seen before, the life of a museum, a culture I know nothing about or a trip somewhere I’ve never been. Seeing the lives of this men held little fascination for me. Partly because the sport is not of interest to me and partly because there is little new for me since I have a brother who was briefly interested in pumping up, though not for competition.

On the other hand if the subject interests you on any level this film is going to delight you. Recommended for those with an interest when it opens Friday at the Anthology Film Archives in New York.
Posted by Steve Kopian at July 05, 2018