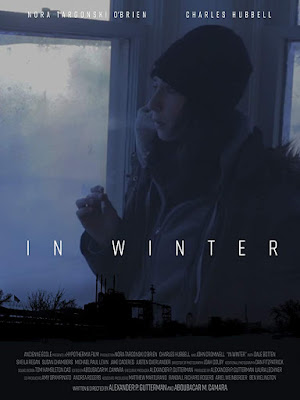 IN WINTER begins with a six minute opening shot of a town in a snow storm  A figure appears and walks across the frame. The camera follows as the woman walks to the front of a hotel where she smokes a cigarette before going inside. It's a long shot so we don't see a lot of detail but it doesn't matter because in the time it takes to play out we have gotten a deep sense of place that hangs over the entire film.

Nominally a drama about a woman who begins an affair with a married man, the film is so much more than that. It is really a mediation on life in a small back water town. I say this because I think we're a good way into the film before film really focuses on the affair. Before that there is a lot going on with everyone's lives getting some time to be the focus.

Looking at the film I'm a bit confused at how this film hasn't been the focus of a great deal of discussion in film circles. Looking nothing like a typical inde film this feels more real and more alive than most other films I run across. There is a real sense of life and of place that bleeds off the screen. Why it hasn't thrust on my radar confuses me. Yes the film played the Kew Gardens Festival last year but it had to play elsewhere and get some sort of acclaim.

Perhaps it is the fact that the film is quiet and low key. It is not one that screams "Notice Me!".  It is slow and meditative. It takes a while to get going and there are long scenes that play out in long takes. However unlike other long take films, this one does it i such a way that we feel we are sitting in the room or at the table with the people involved. We are in on the events and it goes a long way to keeping us hooked.

Co-directors Aboubacar M. Camara and Alexander Gutterman have made masterpiece of a film. It is a film of subtle quiet power. It's a film that is going to haunt you, hanging around the edges of your consciousness. They have made a wonderfully unflashy film. It is one that dares to take it's time and we are so much better for it.

You need to see  this film. And when you do see the film clear your mind and just let it go as it goes. The film takes it's time drawing you in and building the connections. Let it take it's time. Don't rush it. Just let it wash over you. If you do that then the film will fully engage you and you will see it for what it is, something truly special.

IN WINTER is true unseen gem of a film and recommended.

IN WINTER is released July 10 on DVD and on digital download/streaming/pay per view
Posted by Steve Kopian at July 07, 2018