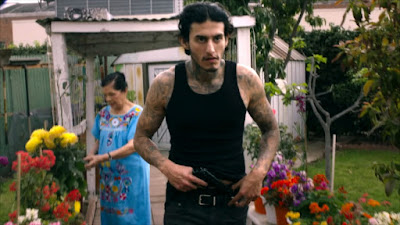 This off beat portrait of a hitman trying to retire is a small gem of a film.

Khali is a killer who wants to quit. He's finally gotten enough money together to finally go off and become a chef. However fate intervenes when he's carjacked and his money is stolen. Needing some cash to put his grandmother into a good nursing home he agrees to kill the wife and mother in law of a friend in return for a large cash payday, however things don't go as expected.

Writer/director Jon Matthews  scores big time by taking a well worn story and turning it on its head. Matthews' script isn't concerned with killing, despite the title and is instead focused on the interior landscape of his main character. We are focused purely on Khali and his attempt to fix his life with his ex, his daughter and his grandmother  While there is some killing, in the dynamite opening sequence, for the most part this is a blood free affair as our hero finds out that karma is a harsh mistress.

That the film works as well as it does despite having some odd tonal shifts is due entirely to star  Richard Cabral who not only makes us like Khali, he makes us believe everything that he is going through. Cabral gives a stunning performance that makes us instantly like his character. There is a sense of depth of emotion  always on show, all one has to do is look in his eyes. Cabral is so good that I could see him getting more leads based on this role since he comes across as so damn likable.

If there is any problem with the film, its the aforementioned odd tonal shifts with the film picking up a seriousness in the second half that doesn't fully integrate with the humor.  While far from fatal, the odd shifts from humor to drama to thriller and back again may confuse people looking for a simple crime film...

...on the other hand those looking for a small gem of a film that goes gloriously its own way will eat up KHALI THE KILLER.

One of the real gems of the Portland Film Festival and it is highly recommended when it plays tomorrow
Posted by Steve Kopian at November 03, 2017