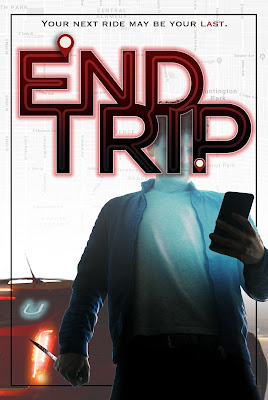 While not breaking any new ground,Aaron Jay Rome's thriller is much better than you'd expect. Despite doing everything you'd expect it to the film manages to over come a sense of dejavu thanks to Rome's skill as a filmmaker. While very much a horror film, the film looks at times more like a film noir offshoot of Scorsese's TAXI DRIVER with a frequent use of style that makes the film worth seeing.

What I like abut END TRIP is that I actually wanted to see where this goes. More often then not with many recent inde- horror films I have to force myself to stay to the end. Sometimes I make and sometimes I don't.  With END TRIP I stayed to the end because I genuinely wanted to know what was going to happen. Sure I had an idea or two but at the same time I still cared enough to find out. That may sound like faint praise, and something that is going to make the filmmakers pull their hair out, but understand the ability to say this is a good and solid little film is a triumph. The fact that I can simply say "give the film a go it's good from start to finish" is actually better than my saying well this bit is good but the rest is crap.  Rome and his fellow filmmakers have made a film that entertains from beginning to end.

Worth a shot for anyone who likes small scale thrillers with lots of style.
Posted by Steve Kopian at May 16, 2018