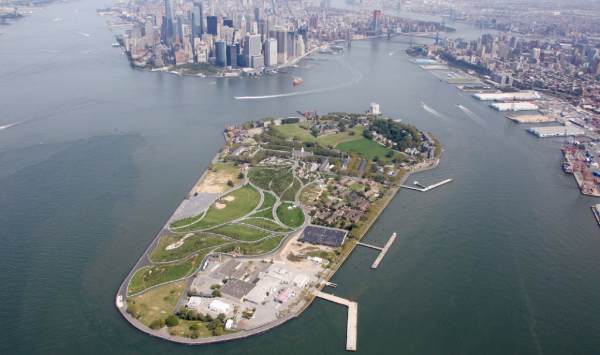 The Film Society of Lincoln Center has partnered with the Trust to curate film selections this summer, its first outdoor series in decades. The theme for Escape in New York draws inspiration from the Island’s iconic views and the sense of escape visitors enjoy when boarding the ferry or watching a film on the big screen. The series will kick off with a screening of John Carpenter’s cult classic Escape from New York on June 8. Other films to be showcased throughout the season include The Last Dragon, Ghostbusters, and Desperately Seeking Susan, each paired with an independent short film by a local New York filmmaker. Rooftop Films will lead the technical production on the series, bringing more than two decades of experience producing outdoor movie screenings in New York City.

“In the 1970s and 80s, before we had our own theaters, the Film Society of Lincoln Center presented outdoor screenings across New York,” said Lesli Klainberg, Executive Director of the Film Society. “We are returning to our roots, in a sense, by partnering with Governors Island on a free public film series, and we are thrilled to celebrate the city’s history by screening these NYC classics while also looking forward with contemporary shorts by local filmmakers.”
Kicking off on June 8, the Escape in New York series will take place during Governors Island’s Late Fridays and will occur on the second Friday of every month between June and September. Up to 10,000 moviegoers will enjoy films. Screenings will be free and open to the public with pre-show entertainment kicking off at 7:00 PM and the films beginning at dusk.
“We are thrilled to partner with the Film Society at Lincoln Center on a cultural program never before presented at this scale on the Island,” added Meredith Johnson, VP of Arts and Culture at the Trust of Governors Island. “Working with Rooftop Films on the production of this groundbreaking series will be an example of art and public space coming together to shape quintessential summer memories for tens of thousands of New Yorkers.”
Ferries during Late Fridays will run from the Battery Maritime in Lower Manhattan, located at 10 South Street. On film nights, they will depart Lower Manhattan at 5:30, 6:30, 7:30 and 8:30 PM. Ferries will return to Lower Manhattan from Soissons Landing at 6:00, 7:00, 8:00, 9:00, 10:00 and 11:00PM.
Full Schedule 6/8 ESCAPE FROM NEW YORK (John Carpenter, 1981, 99m) w/ THE ROAD TO MAGNASANTI (John Wilson, 2017, 15m)
7/13 DESPERATELY SEEKING SUSAN (Susan Seidelman, 1985, 104m) w/MY LAST FILM (Zia Anger, 2015, 9m)
8/10 GHOSTBUSTERS (Ivan Reitman, 1984, 107m) w/REVIEW (Dustin Guy Defa, 2015, 4m)
9/14 THE LAST DRAGON (Michael Shultz, 1985, 109m) w/HERNIA (Jay Giampietro, 2015, 12m)
Governors Island will open for the 2018 season on May 1 and will be open daily until October 31. The Island is open to the public from 10AM to 6 PM weekdays, weekends from 10 AM to 7 PM and Fridays between May 25 and September 14 until 10 PM. Ferries will be free during opening week, May 1-May 6. For more information, visit www.govisland.org.
About the Film Society of Lincoln Center The Film Society of Lincoln Center is devoted to supporting the art and elevating the craft of cinema. The only branch of the world-renowned arts complex Lincoln Center to shine a light on the everlasting yet evolving importance of the moving image, this nonprofit organization was founded in 1969 to celebrate American and international film. Via year-round programming and discussions; its annual New York Film Festival; and its publications, including Film Comment, the U.S.’s premier magazine about films and film culture, the Film Society endeavors to make the discussion and appreciation of cinema accessible to a broader audience, as well as to ensure that it will remain an essential art form for years to come.
For more information, visit www.filmlinc.org
The Film Society receives generous, year-round support from Shutterstock, the National Endowment for the Arts, and the New York State Council on the Arts with the support of Governor Andrew M. Cuomo and the New York State Legislature. American Airlines is the Official Airline of the Film Society of Lincoln Center.
About The Trust for Governors Island
The Trust for Governors Island is the nonprofit corporation created by the City of New York that is responsible for the redevelopment and operation of 150 acres of Governors Island. The Trust's mission is to transform Governors Island into a vibrant resource for New York City, making this island at the center of New York Harbor a destination with extraordinary public open space, as well as educational, not-for-profit and commercial facilities.
For more information, visit www.govisland.org.