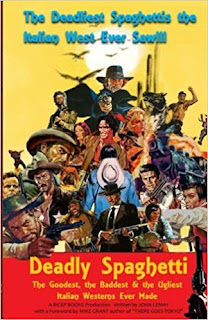 Breezy pocket guide to some off the beaten path Spaghetti Westerns is an amusing fast read.

Put together by John LeMay who wrote the Big Book of Japanese Giant Monster Movies , which I love, this small scale book is similar to the earlier volumes, however the tone is much less serious to the point that I thought the book was written by someone else. The tone of the book makes this much more like shooting the breeze than authoritative.

The collection of the films breaks each film via certain categories (Moral Message, Best Unintentional Moment, How Accurate is the Poster, The Spaghetti Code ect.) with each film ultimately rated as good bad or ugly.  Most of the real writing takes place in the Background & Commentary section where the plot is laid out in detail and Lemay discusses the films in a friendly and matter of fact way. Its the sort of discussion you'd have while sitting around with your friends.

The choice of films is interesting in that LeMay intentionally steers away fro the great films and instead focuses on 31 lesser known films many of which you're going  to find on bargain DVDs and streaming on the internet for free or next to nothing. Sure we get KEOMA and MANNAJA which are two excellent westerns, but we also get things like JOHN THE BASTARD, SHANGO or TWICE A JUDAS which are nowhere near as well known.

I had a blast reading the book, especially since the tone is loving but far from academically serious. Its a sweet little trifle of  book. If you like westerns its worth a look. Be warned though, this isn't  a reference guide but merely a friendly a pointer, which  isn't bad
Posted by Steve Kopian at May 25, 2018