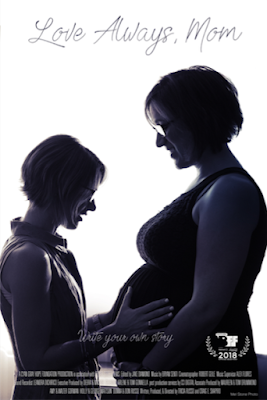 Tricia Russo and Craig E. Shapiro's LOVE ALWAYS,MOM charts the course of Russo's path to motherhood. Diagnosed with breast cancer Russo has to put off having children because she needs to fight the illness. However when the disease spreads she and her husband have to decide if it's worth the risk of her going off the chemo to harvest her eggs so that a surrogate can carry their child.

Made up of footage shot during Russo's struggle, the film has a very real "you are there" vibe because we really are there. We are so much in the thick of things that you begin to feel as though everyone is part of our family.  There are very few taking heads, simply live as lived, with the result that the film trumps every other similar film I've run across.

Forgive me for not going into too much discussion,but this is a hard film to critique. Not because it's bad but rather it's life lived and it's nigh impossible to criticize someone's life lived. This is a film more about being in the moment with the people on the screen than it is about being in a movie, which is what a documentary should be about.

LOVE ALWAYS, MOM is going to make you feel good. It is a film about striving to get what you want and some how finding away. As Russo says never give up, just keep following plan B or D  or Z or whatever will get you closer to your goal.

While this wouldn't have been my first choice of a film, the subject is not something I'm really interested in, it is a film that I really liked a great deal once I sat down to see it.

While the Bentonville Film Festival screenings are done, the film is worth seeing and very recommended when it hits the next bunch of festivals and it's eventual theatrical run.
Posted by Steve Kopian at May 12, 2018