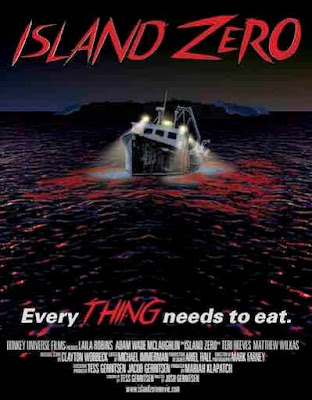 On an island off the coast of Maine there is a sudden change for the worst. The fish are suddenly gone and the ferry to the mainland has stopped running. No one is able to contact the outside world.  People who try to make their own way off the island either disappear or turn up dead. Something is killing, and seemingly devouring every living thing.

Low key horror film doesn't show much but has a great deal of tension as we and the characters, struggle to figure out what is going on.  The keeping the reveals to a minimum works wonders since by not seeing the creatures or the violence so we have to fill in the gaps with our own imaginations which creates things probably more terrifying than the filmmakers could have come up with. This is a film where, for the most part less is more.

While I recommend ISLAND ZERO and I find that I like the film more than I love it. Its not so much that there is anything wrong with the film on it's own terms it's more there is a point approaching the final third where the momentum should be kicking it to take it in high gear to the end and the film misses the optimal window and the film deflates slightly as the tightly wound tension is released. We are still engaged but not quite as scared as we should be.

Regardless of my quibble ISLAND ZERO is worth a look especially if you like suggestion and less graphic horror films.