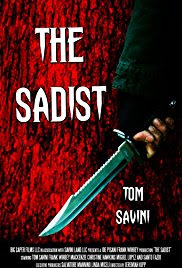 When I spoke to director Jerimiah Kipp in connection with his film THE DAYS GOD SLEPT we discussed his work on the film THE SADIST. Going into the project as a gun for hire he brought along his crew which included cinematographer/editor Dominick Sivilli and a great enthusiasm for the project. However despite a final cut clause in his contract the film was pulled from him just as he had finished the first cut and he was shut out of the creative process. He  said that he bore the producers no ill will and had been directing distributors toward them in the hope of getting the film released.

When we spoke in 2013 Kipp had no idea when the film would see a release, despite being shot in 2010. Having fallen in love with Kipp's short horror films I kept an eye out for some sign of his first feature horror film. Despite a couple years of looking I failed to find anything and it was only after seeing word on his latest film BLAKE WAKE, that I discovered that THE SADIST had been released in 2015 and was on Amazon Prime.

The plot of the film has a young man and his uncle go off o their annual hunting trip. However things turn bad when an escaped maniac (Tom Savini) decides to play a game of cat and mouse with them.

I'm of several minds concerning THE SADIST. Containing some truly great sequences and a great performance by Savini, the film never quite hangs together.  I suspect a large portion of the problem is due to the film being pulled from Kipp and Sivilli who based on their other work and the sequences that work here knew what they were doing. almost all of the sequences with Savini shine and make what should have been a standard issue madman on the loose film something more. Once we get outside of those sequences things become uneven as performances seem to go up and down depending on the take that the producers chose to use. I say this because there are scenes where some of the actors who are perfectly fine everywhere else suddenly are just bad as if they couldn't pick the right take.

On the other hand the Savini sequences are masterful,as you would expect from Kipp, who is in my opinion one of the greatest horror directors working today. There is an almost tactile quality to the fear such as the opening sequence when Savini walks into a barn and does nasty things with a pitchfork.  You can feel his delight at the pain he is inflicting and it is frightening. Later on as the battle between Savini and the others escalates you slip toward the edge of your seat simply because there is great filmmaking afoot.

Is THE SADIST worth watching? Maybe. Its definitely more of interest as a project that might have been had it not been interfered with than as a wholly successful film.