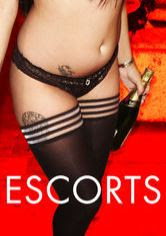 British documentary about two escorts and their lives.

Okay film looks at making money from sex and fantasy in the modern world. While for adults it's not really purient and kind of makes the life, though not the money as something that just sort of is. I was five minutes in and was like "oh, thats it then?" and it kind of stayed in one place emotionally and went nowhere.

Not bad but nothing special-which weirdly may mean it is something special- I'm not sure.
Posted by Steve Kopian at May 18, 2018