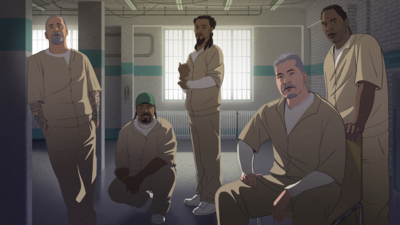 One of the truly great films at Tribeca this is the story of a group of prisoners at the Pendleton Correctional Facility who participated in a documentary work shop. The film is both a rcord of their time in the course and the film they made

Part film on film, part biography of the men, part socialoligcal examination the film manages to be all things at once with the result we are engaged on pretty much every level.

If you ever wanted to know about how people end up in priosn this film is for you.

This is a film that will make you wonder about how is it going to work only to discover that you really don’t care since it works so beautifully, puling us in to it’s brast with an assured hand I say that as a person who didn’t really want to see th film and only did so because it filled a slot on my Tribeca dance card. It ended up being a perfct example of why go to so many films, most I have no interest in, bnamely you never know where you are going to find a jewel,

I suspect that I should be saying something mor substantive about the but I realy can’t. This film has hit me hard on so many levels that it is going to be aa long while before I fully process it. I really should wait until I do but I want to get something up to tie into Tribeca so the rview won’t get lost.

The best thing I can say is see this film, it has y highest and most heart felt recommendation.
Posted by Steve Kopian at May 02, 2018