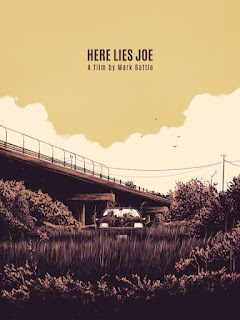 Joe is a suicidal man who meets a young woman at a support group who changes the way he sees life.

Nice little short over comes it's slight over length by kicking it on every other level. From the casting to the look, to the score this film is top notch. Its the sort of film that  should open doors for writer/director Mark Battle because its clear from this film that he has an voice we need to hear in a feature project or two.

The best thing I can say about Mr Battle's talent is HERE LIES JOE has me fishing around for his other films.

Recommended
Posted by Steve Kopian at May 13, 2018