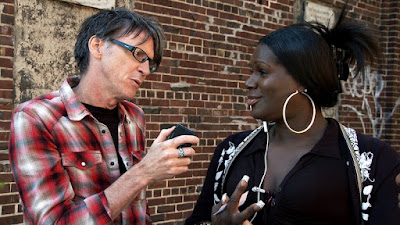 Chronicle of a time so long ago it seems like a fairy tale. Back in October of 2008, before Barack Obama was elected President, radio show host Clay Pigeon went out into the streets of New York to ask anyone who would stop to talk about anything and everything.

Wonderful look at people, New York and America before the circus of truly deep partisan politics set the country on the road to madness. This is a film that constantly surprises at every turn as Pigeon's questions lead into unexpected places such as having the tables turned on himself where he himself has to ponder if he is happy.

Running a breezy 57 minutes this is a film that demands repeated viewing, not only to catch everything that is being said and ponder its meaning both in 2008 and now looking  back with an eye toward knowing how it would all play out and where we would all be.

I know I should take the time and discuss what is said, but I'm not really comfortable doing that. Partly because the film is so short, but more because if I start picking out conversations to highlight you are going to think the film is something different than you do. Several years ago I was discussing Louis Malle's film Place de la République with a friend. In the discussion I mentioned a certain bits of the film as standing out in my head. When my came back to me they took me to task for making the film sound like one thing instead of something much broader. ONE OCTOBER is much broader than I would make it out to be.

ONE OCTOBER open Friday at the Maysles Cinema  and on VOD via Passion River Films on iTunes, Amazon Prime, Google Play, Microsoft XBOX and other digital platforms. The film will also screen nationwide in select cities. For more information on ONE OCTOBER and a full list of upcoming screenings, visit: http://oneoctoberfilm.com/.
Pre order it on iTunes here
Posted by Steve Kopian at May 07, 2018