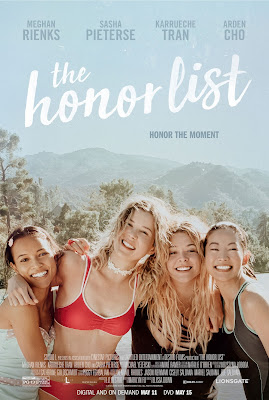 Four long time friends head into high school with hopes and dreams of a glorious future together, however by senior year the friendships are broken. When one of their group dies, the remaining trio are tasked with fulfilling a bucket list they had made when they were freshmen.

With a cast of actors seemingly five years too old for their roles HONOR LIST is never really believable. It begins with the girls as freshmen driving at night to find a long past sunset. I at first thought they were college freshmen but, no they are in high school and I just shook my head. There was a lot of head shaking and hand wringing as the turn of events seemed to be springing from a writer's head instead of anything approaching life.

I blame the film's failure on the writing. The script seems to have been written so as to hit all of the high points that came out of a story conference. We need a culturally diverse group, don't forget to make one girl heavy. Lets hit all the hot topic issues like sex and drinking.  Unfortunately in the process we lost things like any sense of the characters or events beyond the edge of the screen. There is nothing here but what we see on the screen with no real hint of anything beyond that.

I suspect that perhaps on it's own terms this film might be of interest for someone very undemanding but as it stands now it's not really worth the effort.
Posted by Steve Kopian at May 11, 2018

Email ThisBlogThis!Share to TwitterShare to FacebookShare to Pinterest
Labels: drama, not worth the effort