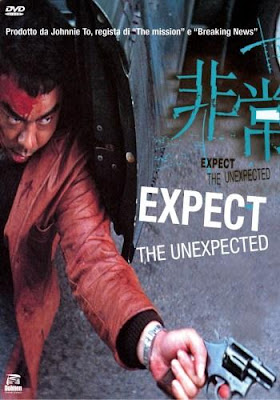 Johnnie To and his partner in madness Ka-Fai Wai produced this totally insane riff on relationship dramas and brutal cops and robbers films.

When a jewelry store robbery goes bad this accidentally puts the police on the trail of a bunch of psycho killers. Meanwhile the various police officers attempt to work out affairs of their heart.

The title says it all, nothing in this film is expected. Every plot turn is completely and utterly out of  the left field from two blocks over. Ten minutes in as the ugly violence switched gears to a lyric romance I was left stunned. There was no way to know how this would go and in a lot of ways we are better for it. We are forced to pay attention because not to  could mean ending up hopelessly lost. The most amazing thing is it all feels organic- nothing is forced- even the "what in the holy F#$@!!!!" ending strangely feels right.

I don't dare say anything else because I don't ant you to expect anything. (Though I will say there is nothing not real)