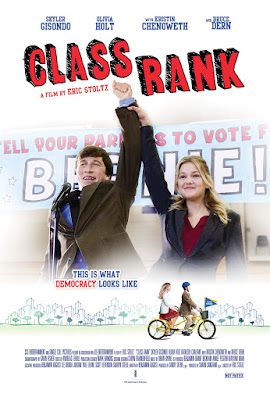 CLASS RANK saddens me. Its not that it's a bad film, rather it has a bad character and as a result the film lost me with in the first five minutes. And despite the character's changes I never really connected to it.

The film is about a couple of super smart, but not so socially adept, high school kids who hatch a plan to run for the school board and change the ranking system for students. Of course this results in unexpected consequences such as romance.

The problem for me is Skylar Gisondo's Bernard. A brainy kid with a very intellectual way of speaking and seeing the world he is also incredibly annoying. He speaks and thinks in large flowery ways and I wanted to smack him. Yes, he gets better, but I never much cared for him. While I freely admit that part of my dislike for Bernard is the fact that I knew kids  exactly like him growing up and they always annoyed me. I never wanted to spend tie with them and clearly I still don't.

As for the rest of the film, its great. This is, on its own terms a sweet litttle comedy. I loved Olivia Holt as Bernard's partner in crime and romance, Kristen Chenoweth is great as her mom and Bruce Dern as Bernard's grandfather . Dern is a national treasure and I would say let's bronze him but that would prevent any later performances. Dern single-handedly made the film a delight for me.

If you can get past the annoying kid at the center CLASS RANK is a really good film and recommended.
Posted by Steve Kopian at May 08, 2018