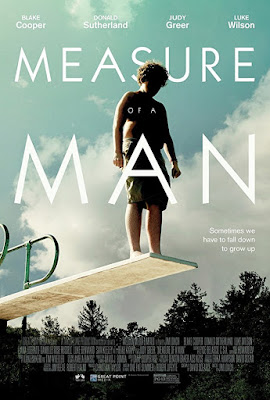 Unexpectedly moving cinematic adaption of 'One Fat Summer' by Robert Lipsyte is one of the best of a number of recent coming-of-age films I've seen. Full of great characters, music and real emotion, the film soars.

Bobby Marks is a teen who hates summer. Weighing 200 pounds he is uncomfortable in his own skin. The last thing in the world he would ever want to do is do anything that would leave his large frame exposed such a swimming. Going once more to his family's summer home on a lake Bobby is given his choice of summer camps to attend. Instead he opts to work for Dr Kahn a rich man with a large piece of property. Over the course of the summer of 1976 Bobby comes to terms with himself, with life and the bullies who seem to plague him.

Where the hell did this film come from and why didn't I hear of it sooner? The only reason I heard of the film is that several weeks ago the PR person handling the film asked me if I wanted to see it and I offhandedly  said yes, never expecting that the film would be this kind of bolt of summer lightning.

The story of a kid coming to terms with himself is beautifully told. The film has the feel of real life bleeding off the screen. I could relate to whole sections of the film which mirrored moments of my teen years. I love that the film gets the feeling of 1976 exactly right. Being ancient enough to have been slightly younger than Bobby is in the film at the time I can attest that it all feels right in a nostalgic way if not a literal one. I love that there are no easy answers and no cliches. Things happen as they do in life, and while Bobby clearly arcs in a literary way it still feels dead on perfect and real.

Blake Cooper as Bobby is wonderful. Watching him go through his summer I felt a kindred spirit.

Equally wonderful is Donald Sutherland as Dr Kahn who hires Bobby and becomes a kind of surrogate father and mentor to the boy. While he doesn't do anything except give Bobby a chance or occasional bit of advice,he is a commanding presence because he treat the boy as an adult when no one else will. He also breaks your heart with all of his pent up emotion hiding behind his eyes or in his inflection of his vice. It's always clear that he feel Bobby is not just a son but kindred spirit.

I can't say enough good about the film other than you must see it when it opens Friday in theaters.
Posted by Steve Kopian at May 08, 2018