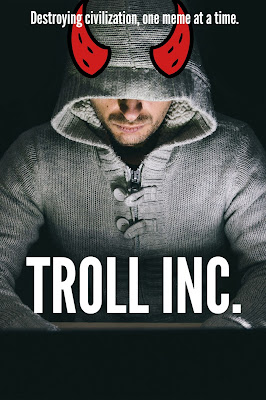 Troll Inc is a film I almost passed over. The offer for access to the film came from a PR firm that normally sends me low budget horror films. Occasionally they will handle a small drama needing TLC but largely they handle horror films or thrillers or science fiction films. However occasionally they do handle documentaries, and when they are handling documentaries I always sit up and take notice because their docs are choice. I mention the fact that I almost passed the film over because with the name Troll Inc, I thought it was going to be a horror film. It wasn’t until I took one last look at the email that I realized it was a doc and as such it jumped to the top of must see pile.

Having seen Troll Inc, you should put the film on the top of you must see list.

Nominally a portrait of Andrew Auernheimer who took his skills and went from a money making mad man creating click bait to a wanted criminal and general pain in the ass for authorities with his trolling around various topics, Troll Inc is actually so much more. The film is a super look at the role of the internet and all of social media in today’s world. It’s a film that explains why and how wacked out stories trend, why people seem to be believing weird ass stories and why society seems to be careening toward a cliff of stupidity. It also reveals scary invasions of privacy that reveal we are not really safe on the internet.

I was absolutely shocked by some of the things the film reveals, particularly the wide belief that people seeing nothing wrong with fucking with people’s heads just because. I understand the need to shake people out of complacency and get an occasional laugh but things are getting out of hand people are actually buying some of this nonsense.

But there is so much more to this story and it would take me a couple hours to discuss it all. As a result I’m going to leaveit hear and simply say see this film. Its out on VOD as of today and is worth your time andmoney.
Posted by Steve Kopian at May 23, 2018