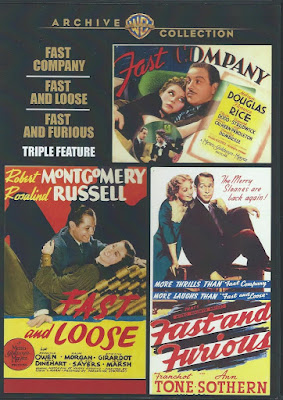 MGM tried to get a series of mysteries going based on the characters of Joel and Garda Sloane in Marco Page's Fast Company about a married couple who are rare book dealers who make more money finding stolen books for insurance companies than trough actual sales. I would think the idea was that they wanted to duplicate the THIN MAN but instead of staying with perfection with Melvyn Douglas and Florence Rice they changed the leads in the two subsequent films - and instead of staying with Page and Harold Tarshis they turned the writing duties over to the workman Harry Kurnitz which made the films enjoyable but nowhere near the lost classic of the first film. 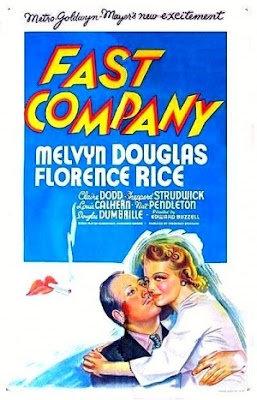 Melvyn Douglas and Florence Rice star in FAST COMPANY and are abetted by a cast of great character actors that include George Zucco, Douglas Dumbrille, Nat Pendleton, and Dwight Frye as well as many others. This first time out the Sloanes want to help  a friend who is just out prison. Sent away for book theft for which he was framed, he has come back to New York with the hope of restarting his life- with the daughter of the man who framed him George Zucco. When Zucco ends up dead  he ends up in jail and the Sloanes snap into action.

Full of endlessly quotable dialog and a wicked risque streak this film is an unexpected delight. Rarely has sex dripped from every line of dialog between two married people. Clearly intended to hit the same territory as the THIN MAN films FAST COMPANY brilliantly holds it's own thanks to the note perfect casting of Douglas and Rice who seem madly and passionately in love. We completely understand why they are together since they perfectly compliment each other.  As much as the Nick and Nora were always my ideal couple I think Joel and Garda maybe even more so because the passion between them still burns brightly.

More importantly the mystery around which it all spins is compelling with uncertainty up until the final reveal. I had suspicions but I wasn't sure and was kind of surprised how it all played out.  Too often in films with witty repartee there is no mystery, but in FAST COMPANY there is and we are so much better for it.

The film is an absolute delight and highly recommended. 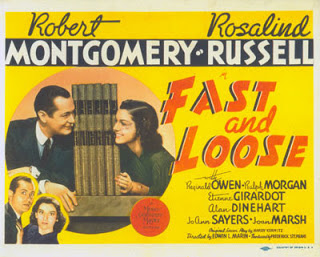 In FAST AND LOOSE Robert Montgomery and Rosalind Russell replace Douglas and Rice as the Sloanes. Montgomery is fine as Joel, but Russell isn't given much to do thanks to the script by Harry Kurnitz which takes away everything that was unique about the writing of the first film makes it much more run of the mill, including much of Garda's character.

This time out the Sloanes are asked to help facilitate the purchase of a rare Shakespeare manuscript. Added into the mix is the fact an insurance company has asked the Sloanes to investigate some rare books known to have been in the possession of the family selling the Shakespeare, but have not been listed as having been sold. Fearing someone is quietly raiding the collection they want the Sloanes to look into it before they get stuck with a bill. Family strife and gambling debts all feed into a story where several people end up dead.

Kurnitz's original script is run of the mill. There is nothing we haven't seen before as the film chugs along from clear plot point to plot point. The solution is surprising because I don't think there is any set up for the solution. He also didn't know what to do with Garda and Russell is left to survive on her personality alone.

While the film is enjoyable and quite good, it isn't the classic of the previous film. 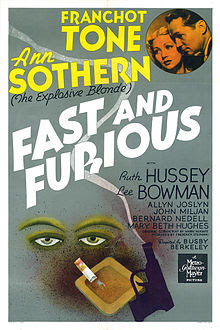 The last time out of the box was FAST AND FURIOUS. Here Busby Berkeley directs Franchot Tone and Ann Southern as the Sloanes. While the film is enjoyable it is a step down from both previous films.

With the city much too hot to survive in, the Sloanes head to a sea side town where a friend is helping produce a beauty pageant. When the promoter, who was going to abscond with all the cash is killed,  the Sloanes must help their friend who is the prime suspect.

Kurnitz's script removes the Sloanes from the book world entirely and drops them into a seaside resort where anyone could have been part of the mystery. While he does give Ann Southern some real sleuthing to do, he doesn't make the mystery anything special with a WTF solution out of left field. This truly is a typical program mystery but without any sort of sense of who the detectives are. Tone and Southern are not allowed to stand out with the result the one thing you are going to remember is only the lion tamer subplot.

Taken on it's own terms FAST AND FURIOUS is a good little programmer but it pales when compare to the previous two films.

Fortunately for all concerned the three Sloane films are out on one DVD from the Warner Archive. The films all look great and the all in one packaging makes the trio a perfect way to spend an evening on the couch. The disc also as the original trailers for the tree films with the FAST COMPANY one being something special since it is not made up of images from the film but was entirely shot for the trailer.

The disc is highly recommended because of FAST COMPANY,with all other two films being welcome gravy.
Posted by Steve Kopian at May 05, 2018