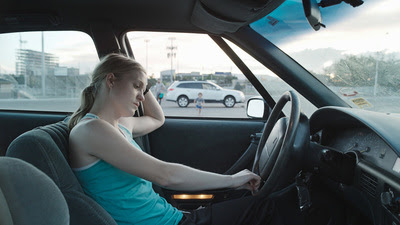 When she runs the audience sleeps.

Hands down the least (read that as worst) film to ever be part of the ESPN Sports Film Sidebar at Tribeca. I've been going to the festival for 9 years and I've seen most of the sports films and this one is dull boring and barely about sports. It is also just bad

Basically it 24 hours or so in the life of a woman training to be a world class runner. We watch as she trains, sees her son, goes to a family gathering and then goes to a meet.

We also are bored to tears since we get long takes of stuff kind of happening and little explanation. We watch as the woman runs on a treadmill or lifts weights. She eats chicken for breakfast. She talks to her coach. He son sits on a table and doesn't eat his hamburger. She teaches someone to make snow cones.

Yes its her life, but why are we watching it? Why are we watching in long takes? To make it like life? Unless you are Bela Tarr leave it alone. And just because this is a slice of life this film it could have used actors who do more than walk through their roles and speak in more than muted monotones (recast the whole film with the kids, that would have made a much more interesting film)

What really pissed me off about the film is that the write up lists a whole slew of things that are never mentioned in the film itself. We don't know who her coach is (supposedly an Olympic winning personage) or what she is training for other than its race. The description is full of details that appear nowhere in the film.

What a complete and utter waste of my time- even at only clocking in at around 70 minutes this is four hours I will never get back.

ADDENDUM
During the Tribeca Festival I encountered a couple of other reviewers, Nate Hood included, who really liked the film a great deal (Nates review is here). Everyone who liked the film saw it on their lap top as part of the screening library so it is entirely possible that how you see the film will determine how you like the film.

Email ThisBlogThis!Share to TwitterShare to FacebookShare to Pinterest
Labels: drama, not worth the effort, sports, tribeca 2018