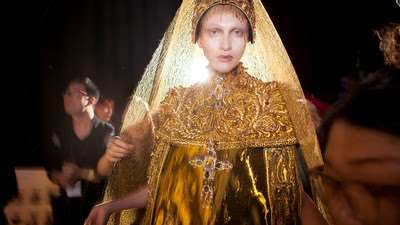 The film begins with a stunning mix of sound and image as we are dropped into the world of fashion designer Guo Pei who made a huge splash when Rhianna wore one of her dresses to the Met Ball.  It then rapidly loses focus as we follow Pei on her quest to join the elite of Paris haute couture.

I really don't know what to say. This broken and fragmented film works in the moments where we are among Pei's dresses but is other wise a resounding bust. The trouble is there are no through lines anywhere in the film. The haute couture story comes and goes, as does bits on dress driving her to the doctor, opening a Paris shop, making dresses and everything else that happens in the film. It is so bad that while we are told it can take literally two or three years to make one of her dresses we never see one made- which you would think would be an obvious piece of the story.

When the film ended the the screening room was so quiet I thought that everyone had left- the silence being matched only by the times I've been the first one in.

Other than the odd sequence this film is a waste of time.
Posted by Steve Kopian at May 01, 2018