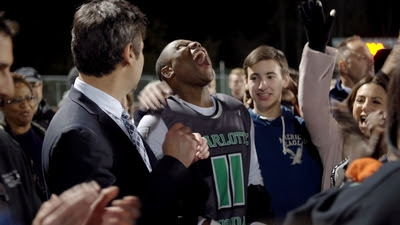 I think many people stayed away from Crossroads because they thought it was going to be a just another cliché filled film about a small school that became a powerhouse in lacrosse in North Carolina through a kind of force of will, and you’d be partly right. However thanks to some great subjects and some unexpected turns this rises about the run of the mill to become one of the great hidden gems of Tribeca.

Focusing on Charlotte Secondary and it’s coach Bobby Selkin the film tells the story of how the school put together a Lacrosse club simply because they could get free equipment. The kids then wanted to actually form a team so they could play games so the school formed one, despite most of the kids having no idea what lacrosse was a short time before. They then managed to get to the state championships in their second year. We watch as the kids change themselves and everyone around them as a result

I don’t know what to say but there is an emotional intensity to this film that goes way beyond the norm, even for a feel good sports film. We see both the highs and lows of this wild ride and as a result we are left drained. Every tear and yelp of joy is earned because we were there from the start. As much as the boys are the coaches team they rapidly become ours as well.

I can’t say a single thing bad about the film because even though we are In well-worn sports film territory Crossroads makes it all seem new.

Forgive the lack of details but this is a film you’ll want to experience for yourself rather than read by fumbling words.

Highly recommended
Posted by Steve Kopian at May 03, 2018