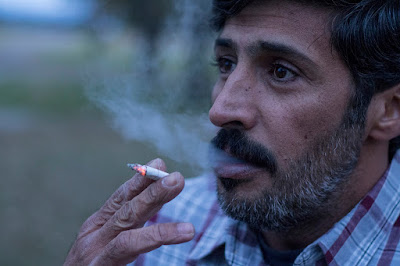 This is the story of three interpreters, Phillip Morris, Malik and Mujtaba who worked for the US military in Iraq and Afghanistan and looking to find safety in America. We follow them over several years as they explain what their job was like and as they try to navigate the

This is an excellent documentary that really gives you a sense of what it is like to work with the Americans. We see exactly what that means from the good things to the dangers of simply being out with the soldiers on patrol to the fact that extremist forces have marked them for death because they choose to work for their enemy. It's a scary story that I really haven't seen so clearly and level headedly portrayed. There is no holding back and no sugar coating.

The film will also really piss you off as the men who served America are kind of left to twist in the wind as bureaucracy makes what was supposed to be a ten month fast tracked process to get them to America   taking the glacial five years as they live in constant danger of being killed for having connections to America. By the end of the film you will want to stand up and do something especially since the Trump administration has slowed the visa process to a crawl.

This film is one of the most important of the year and is a must see  because it highlights a part of our military misadventure that we don't really consider despite it being one that should be in the forefront.

THE INTERPRETERS World Premieres May 26th and 28th at the Telluride Mountainfilm Festival. For more information and tickets go here.
Posted by Steve Kopian at May 24, 2018