As those of you who have read my review (here) of the film know I absolutely loved the film and as soon as I got home from the press screening I asked about interview opportunities with anyone who would talk to me. The PR people handling the film said they would set something up and we were soon off to the races.

The path to our talk was a winding one. Originally we were supposed talk during Tribeca however scheduling conflicts pushed it into the week after the festival. Further twists occurred when the day of the phone interview turned into an unexpected 90 degree May day which made my quiet office a loud one filled with air conditioner noise. I decided to move my end to a nice shady spot near by  where no one ever goes, only to have a large truck drive up in the middle of the interview. When I explained what the sudden loud noise to Stephen he said Mr Sakamoto would have been amused since he creates music from serendipity. Perhaps he would have been amused but it was one of the reasons that  the audio recording couldn't be transcribed for a Q&A style piece. As a result what follows is a report on our discussion rather than a verbatim report. 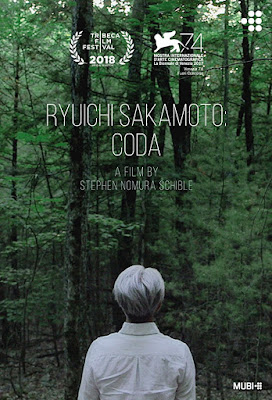 I began by asking Stephen when and how he first met Mr Sakamoto. I had assumed that they had met prior to when filming began but turned out  not to be the case. Surprisingly the two men only met on the first day of filming.

Stephen had heard that in the wake of the Fukushima disaster that Mr. Sakamoto was going to step up his activism and anti-nuclear stance. He was going to be putting on a No Nukes concert and Stephen, a long time fan, thought it would be a good idea to record it. He reached out to Mr Sakamoto's office to see if he would be open to the idea, which then set everything in motion. Stephen said that the fact that he grew up in Japan, was fluent in Japanese and lived in New York fit well with Mr Sakamoto who had been living in New York for the past two decades. He also said that Mr. Sakamoto liked an earlier film,  ERIC CLAPTON: SESSION FOR ROBERT J  he had worked on

Since the film came out of Mr Sakamoto's activism I asked about a line in the press notes which stated that there was a potential price for being anti-nuclear in Japan. Stephen explained that political activism of this sort is not looked upon in a positive light in some sectors of Japan. A cabal of power companies, politicians, and powerful business interests work to control how things are viewed. Intimidation tactics were common in the past. While Mr Sakamoto is ultimately a big enough star that his fortunes really wouldn't be hurt directly by his stance, any problems would bleed down to his friends and collaborators. For example the original idea was to make a concert film and audio recording of the concert but plans got pushed aside because many of the supporting acts and collaborators didn't want any recordings made.

He added that it generally very difficult to be anti-nuclear in Japan and hold any sort of official position. For example there are no tenured nuclear physicists in Japan who have an anti-nuclear stance.

Our discussion then shifted gears to the making of the film.

The film began in 2012, right after Fukushima and shooting continued off and on until 2014 when Mr Sakamoto noticed that there was something wrong with his throat. When it was revealed to be cancer filming shut down as all attention was focused on his just getting well.

The whole project was suddenly cast in doubt as. Eventually, once Mr Sakamoto recovered, the three year project became six.

When the film went into the break no one knew what was going to happen. All plans or thoughts of what the film would be were gone. When filming resumed things were simply allowed to progress as they did, in an organic manner. This worked out for Stephen since he had hoped that during the course of the film he might be able to chart the creation of a piece of music, and he ended up charting the creation of an album as well as a shifting in Mr Sakamoto's career.

Stephen said that surprisingly Mr Sakamoto let him and his small crew completely into his world. As a result of the openness they became friends over the course of the film..

The crew that shot most of the film was small. Mr Sakamoto's son Neo Sora who had studied film in college also joined the team after his illness. Because Neo was often shooting alone he managed to capture a great deal of footage and "ah ha" moments that otherwise wold have gone unrecorded. With the way things came together with the unparalleled access they were able to record Sakamoto's finding of joy in unexpected discoveries.

Shooting finished on April 25th 2017, which was one year to the day before the Tribeca Film Festival premiere.

I had wanted to know about the music in the film.I specifically wanted to know if I was correct in thinking that  the only complete pieces of music were the opening concert piece from MERRY CHRISTMAS MR LAWRENCE and the final piece (Water State 2). I was also curious about how the music was chosen for inclusion.

The first thing that Stephen did was correct me by saying that the MR LAWRENCE piece is not complete. There is a music edit in the middle of it because of the length of the piece. He also said that Water State 2, the final piece, is actually a special version of the music created specifically for the film.

Stephen said that all of the musical sequences used were chosen by himself and his editor. Mr Sakamoto gave no input as to the choices, not because he didn't care, rather because he trusted Stephen to make the right choice.  He added that Mr Sakamoto was very supportive in the making of the film, which he viewed as very important, but was he understood it was the work of the director.

Stephen went on to say that the film was designed to be a kind of song of it's own. How the music and image come together was very important. Its a kind of a song, with its own musical rhythms and construction that is inspired Sakamoto's work, much like the album we see being created is inspired by the work of Bach and Tarkovsky.

When I asked if there would be a soundtrack of pieces used in the film Stephen said that it wasn't likely since the film was its own soundtrack or it's own piece of music.

Stephen stressed repeatedly that Tom Paul's work as a sound designer makes the film a must to be seen in a theater. The film is meant to be seen with loud 5.1 audio which will act as an envelope to surround the audience.

I asked about his preference in seeing a film, is it in a theater or on TV or a device.  He said that the theater is always preferable, especially with a film with big sound and image. However, being a busy father he completely understands that that isn't always possible, adding he is a frequent Netflix watcher.

"Some films need to be seen on a big screen" he said. Adding " You should never underestimate your audience when they watch something on a laptop or phone. They know the experience is not the same and they will go to see something a second time if they feel it is necessary" He mentioned that he spoke with several people who saw the film on their lap top via screeners and that they understood what CODA was and how it would be different on a big screen. He stressed that they still got the film seeing it small. 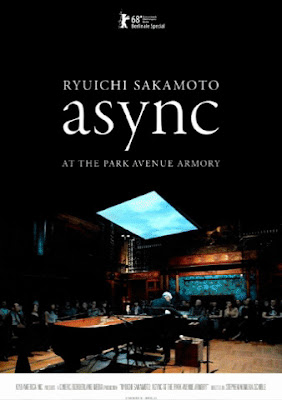 I asked how many performances  had been filmed with Mr Sakamoto and Stephen said a a few. He then added that the Park Avenue Armory shows that had closed out the shoot of the film had been turned into a spin off film called RYUICHI SAKAMOTO : async AT THE PARK AVENUE ARMORY. The film has been released in Japan and played at the Berlin Film Festival. He said they are now working on getting the film released here in the United States and elsewhere in the world.

Stephen added that he as thrilled that CODA would be playing in New York beginning July 6th at Lincoln Center because the sound system is so good there. (note: as of this writing both Stephen and Mr Sakamoto will be doing Q&A's during the run)

As we were wrapping up Stephen said that since I had mentioned that I had seen the Tribeca Q&A (it can be seen here) there was one story he wanted to tell at the screening but didn't get the chance.

He said that as he was interviewing Mr Sakamoto for the film he would often show him archival clips to get his reaction. One of the things he had shown him was the footage of his playing the "Tsunami piano".This was a piano found in a school after the 3/11 floods hadreceeded. Mr Sakamoto's encounter with and playing of the piano is part of the opening sequence of CODA and is an in=mage that stays with you. Despite ending up as being a memorable part of the film, Mr Sakamoto had largely forgotten about the encounter. However once he saw the footage he instantly asked Stephen for the footage and he then used the sound of the piano in  the piece of music Zure. (Stephen also used the sound in the audio of CODA during the sequences when Sakamoto remembers 9/11 and 3/11). He then said he was happy to know that the film tied into and was part of the very music that he was chronicling.

And with the conclusion of the story we said our goodbyes.

I'd like to thank Austin Schiano for arranging the interview. I also need to thank Stephen Nomura Schible, yet again, for taking the time to talk to me about his films.

Lastly I want to remind you that RYUICHI SAKAMOTO: CODA opens at Lincoln Center July 6th at which time. both Stephen and Mr Sakamoto will be doing Q&A's at select screenings.
Posted by Steve Kopian at May 07, 2018