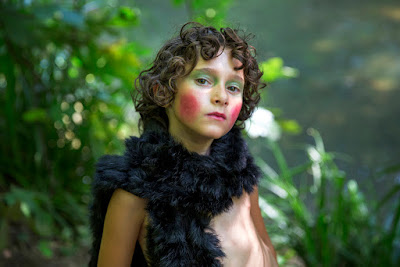 Carla Simon’s autobiographic SUMMER 1993 has the lived in quality that few memory plays ever achieve. Simon’s recounting of what happened when her parents died and she was sent to live with an aunt and uncle is nicely unsentimental. More a warts and all retelling of what happened, or as close to what a six year old would feel and experience.

The film is the story of young Frida. She is, at the start a silent cypher. Something terrible has happened around her and she is being moved around by adults. We don’t fully understand what is happening because Frida doesn’t understand. Taken in my her aunt and uncle she now finds herself with a defacto sister, three year old Anna, on whom she vents her frustration and sadness. The love hate relationship results in Frida being viewed with caution by the adults.

This is a glorious slice of life.  Even in the darkness. Simon has made a film that lives and breaths and as if she had managed to capture a moment in time and show it to us

While the film is wonderful across the board I particularly love the scenes between Frida and Anna. The moments between these two children are incredibly powerful and don’t seem scripted. Watching the pair interact is like watching real children talk to each other. How the hell Simon managed to get them to transcend what had to be a scripted exchanges to be something taken from real life perplexes me. At no moment does it feel fake.

I original screened this film back at the start of the year when the film was playing at some festival or another. Because I was given access to the film late I was asked to hold off reviewing the film until it was released to theaters everywhere. While I groaned and stomped a bit because I soooo wanted to talk about the film I completely understand it because the distributor wanted someone to talk about the film when it would do the most good- at the time of release.

Better yet go see SUMMER 1993 so that studios know and understand that people don't just want giant blockbusters but really good films of all sizes.
Posted by Steve Kopian at May 21, 2018