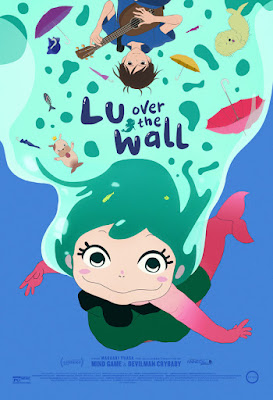 With LU OVER THE WALL opening Friday here is the part of my report on the New York International Children's Film Festival Opening Night where I reviewed the film.


The film follows Kai, a depressed teen who relatively recently moved with his dad to his family's home town by the sea. Kai tinkers with music with his computer and when his friends find out they try to get him into their band. At the same time the town is supposedly the home waters for the mer-people. Many in the town don't believe they exist and those that do think they are evil and eat humans. However since they like music a mermaid named Lu comes into contact with Kai and his friends thus causing all sorts of complications as a result.

Joyous, wonderful and happy, LU OVER THE WALL is frequently one of the most viscerally emotional films you will ever see. In simpler terms it will move you to tears for no determinable reason other than it is just so damn cool.

It is one of a kind and totally unique. The only way I can describe it is as if Hiyao Miyazaki went to Warner Brothers to make Ponyo with Tex Avery and Chuck Jones while John K offered suggestions while scoring it to an infectious J-Pop score that is perfectly translated in the English dub. That's not really what it is but it will put you in the ball park.

Animation style shifts depending on the moment.Masaaki Yuasa, like in his other films, isn't teathered to any one style and simply animates to what the moment needs. He then ties his images to one of the most perfect scores around. The resulting marriage of image and sound over rides the logic centers of the brain and tickles the heart strings.

I mention over riding the logic centers because to be quite honest the plot of the film is often messy. Clearly there is internal logic, it's just not always clear- which in this case is fine because the sound and image and characters carry the day.

I have no idea what to say other than I was moved to tears several times. Don't ask me why or how - I don't know. All I know is I was and am delighted it happened.

I am intentionally not telling you about the wonders contained in the film because you have to see them for yourself- though I will give you a clue and saw mer-dogs.

I wish I had known they were playing this in English because I would have brought my niece who would have gone crazy for it.

This is a must see...and one you want to stay through the credits since there are little bits of animation that delight all through it with a parting shot that brought an audible sigh to those in the auditorium.
Posted by Steve Kopian at May 10, 2018