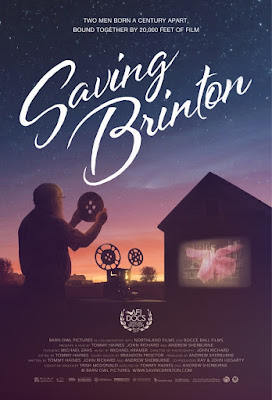 When Indiana Brinton passed away all of the material, books, posters and movies that she had collected over the years was taken by her executor who had hoped to sort out its historical significance. It seems she and her husband has spent decades touring the Midwest of America screening films in the true infancy of motion pictures. What she left behind was a vast collection that related to film prior to 1910. When the executor died he still had the collection which was taken over by Michael Zahs who kind of sat on the material for another 30 years. With the need for room Zahs turned the material over to the University of Iowa’s Special Collection and wondrous things were discovered.

SAVING BRINTON is a curate's egg of a film. On one hand it is a beautifully rendered portrait of Michael Zahs who happened upon the belongings of the Brintons, but on the other hand the film doesn’t show us a hell of a lot of what was in the collection. I absolutely loved the film but was left kind of unsatisfied the film.

As a film on its own terms it’s a kick ass film. A wonderful portrait of Zahs, a gregarious raconteur with a drive to collect, the film is a film fans delight. Watching Zahs talk about the collection and its history is just damn awesome. As a film lover and a man with celluloid in my veins I ate up everything that was on screen. This is the sort of a tale that film fans always talk about. I mean we watch the discovery and restoration of a lost George Melies film, which is just incredibly cool. I mean it even impressed the legendary film historian Serge Bromberg who is seen being physically moved by the discovery. If you love film this film will make you want to dive into the collection with wild abandon to see what else is there...

Which brings me to the problem with the film, we don’t see a hell of a lot of the collection. We see some posters, some photos, a projector and a couple of clips. We are not allowed to really wade into more of the material. We see the covers of the various books, catalogs and pamphlets but we don’t see inside them. There are posters but we only get a look at a few. And then there are the films which are discussed as being ripe with possibilities, but what are they exactly? We really don’t know. While we get to see the missing Melies, we don’t really see anything else, worse I don’t think we’re even told much, if anything about, any other films other than in passing. . There is a moment where a historian describes the find as not just finding gold on a shipwreck, but also the bills of lading and all of the backstory it as well. The problem is we see one bar of gold and none of the backstory

And before anyone points out that the condition of the items and the films in the collection I have to say that know some stuff is in rough shape. At the same time we should have been shown as much of the collection as possible and not just followed Zahs around. He’s an interesting guy but how many times do we need to see him eating at a social?

Of course I’m nitpicking. I mean I love the film, but there was this point about an hour in when I suddenly realized that the one thing I wanted, which was to see more of the collection, wasn’t going to happen and I kind of deflated. I wanted to feel like Serge Bromberg and look at these wondrous things but we didn’t get the chance.

Despit my reservations SAVING BRINTON is a must, more so if you’re like me and bleed moving images.
Posted by Steve Kopian at May 14, 2018