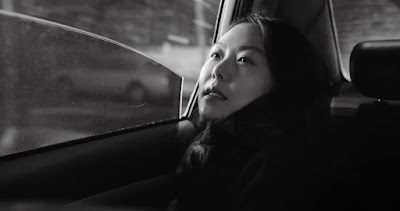 For a movie about betrayal and disappointment, THE DAY AFTER doesn’t let one down despite director Hong Sang-soo’s efforts to involve the audience in these experiences directly. Oh, playfully, to be sure, but directly nonetheless. Key dramatic confrontations are relegated to off-screen events narrated at a  later date. The character who is most intriguing and relatable is not only denied an internal “arc,” but is also literally forgotten by someone you’d think would never do that. And the protagonist, like a refugee from the core SEINFELD cast, arguably never grows or learns much about himself by the time the end credits roll.

None of that matters because the writer-director—and it’s hard to name another so prolific whose batting average is also so high—delivers payoffs all along, not waiting until the final act to reward us in this quasi-farce about adultery, mistaken identity, and intellectualism that's lost touch with how life is actually lived. Along the way, many of Hong’s aesthetic and thematic trademarks are gloriously on display. Shot in low-contrast monochrome with a largely stationary camera, Hong’s deadpan approach to overwrought emotion leaves one unsure if the intended result is humor or anguish—until, as usual, it becomes clear that it’s a combination of these. The overall feel, then, is typical of his work: a lowkey tragic absurdity that, in this case, conveys both the insanity and the inevitably of romantic love.

As a brilliant writer and critic who never once utters anything brilliant, Kwon Hae-yo is perfect as the head-nodding, bland center of a love quadrilateral. His smooth vacuity, ostensibly informed by emotional sobriety and a questionable sense of professionalism, is played off sharply against the three women in his life who think, feel, and intuit more deeply than he ever will. The director repeatedly uses basically the same two-shot to frame the conversations between Kwon’s character and all three of the women. The result is a sense not just of a static camera, but of a static life. Kwon seems destined to repeat the same sorts of scenes out of cowardice—and not even be aware of it.
The only moments that are not static owe themselves to Hong’s emphatic use of minimalist pans and zooms, a device he has used elsewhere and to similar effect. Your initial reaction might be that hey, this overt artifice is mannered to the point of silliness, but upon its repeated, almost rhythmic deployment, it becomes less about formal camera maneuverings and more, paradoxically, about the humanity of the characters. It’s a testament to the artfulness that it’s hard to put into words why this works but, if forced, I’d venture that the artist is helping us sense the artifice and pretense of human relationships themselves. 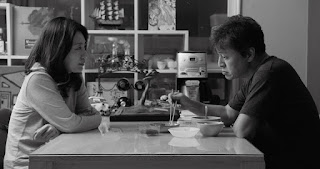 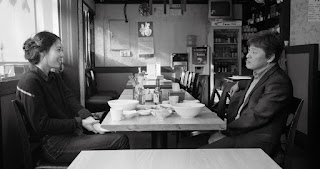 Besides, Hong knows well what Buster Keaton demonstrated way back in SHERLOCK JR: the most spectacular thing in all of film is the edit, not the shot. Here of course it’s narrative special effects we care about, not visual ones, and by the close of THE DAY AFTER the results are dazzling. Telling its story via recursive flashbacks, the film gradually comes to suggest a kind of all-time-is-right-now awareness, with the past pretty indistinguishable from a future we seem to be slouching towards none the wiser for having lived through it before. Twice I was sure that what was a flashback turned out not to be one, and flood of disorientation was wonderful.

In fact, the expert manipulations of time might obscure just how careful and effective Hong is when dealing with space, with emptiness being the keynote. In ways that are suggestive of the inner world of our protagonist, THE DAY AFTER presents its settings with a ghost-town feel that is almost eerie. Again, this sensibility is not new in terms of Hong’s body of work, but is particularly impactful this time out. Numerous scenes take place in cafes, in restaurants, and on the sidewalks of city streets—but no one else is ever visible except the one or two characters we’re focused on; no wait staff ever takes an order or delivers a drink, no other patrons are in the background or heard off-screen. In terms of a psychic landscape, this approach affirms the way that, to those in intense relationships, the outside world itself can recede as they indulge in all their private dramas and melodramas. THE DAY AFTER invites us into that realm, with all its high-stakes ridiculousness, and it’s an invitation you’ll probably want to honor.

THE DAY AFTER opens at the Film Society of Lincoln Center in New York on May 11, 2018.